No answers for the public on water safety

No answers for the public on water safety 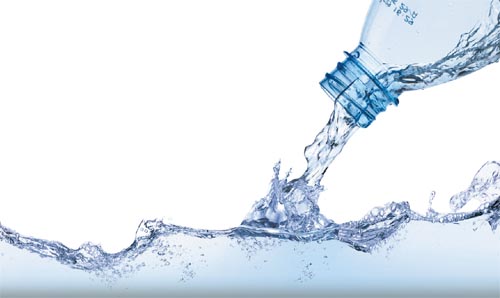 Standing next to a row of juices at an E-Mart on a recent weekend in Yangjae-dong, southern Seoul, Lee Eun-mi, 35, picked up her cell phone and started complaining about how there were no more bottles of Jeju Samdasu water left in the store.

On the other line was her sister, who said she had had a similar experience the other day at a convenience store in central Seoul.

“I know the government says that we don’t need to worry about water being contaminated from the recent mass burial of animals [because of foot-and-mouth disease] but who knows what to believe?” Lee said as she furrowed her brows.

“If the controversy had been some kind of food, you could avoid it, but because this concerns water, I can’t help but be a bit paranoid about the whole thing.”

Lee, along with many other Koreans, switched their water routine after news of the food-and-mouth disease outbreak spread late last year and early this year, followed by the mass culling of livestock.

The FMD outbreak, Korea’s biggest so far in scale, spread throughout the nation, missing only Jeolla and Jeju, beginning in late November. In order to contain its spread, the government ordered farmers to kill more than 3.5 million animals. In the process, around 3 trillion won ($2.8 billion) in state funds was spent, according to industry estimates.

Following reports in March that animal disposal sites were polluting waters nearby, sales of bottled water at E-Mart branches nationwide rose almost 40 percent, according to the company.

Other companies also reported sales increases in the same month.

“The FMD outbreak and subsequent culling of animals had a big impact on bottled water sales as public worry over the safety of tap water increased,” said Jang Min-jin, an internal relations manager at E-Mart. “Jeju Samdasu sales in particular skyrocketed during this period.”

Nongshim, the maker of Samdasu, said that from January through March, sales of Samdasu climbed 40 percent on-year.

An additional cause for concern arose when the nation was struck with news of rain contaminated with radioactive fallout from Japan’s Fukushima Daiichi nuclear plant after the devastating earthquake there in March.

“Sales of bottled water started to climb in December, and, after the earthquake in Japan and growing public concern over radioactive rain contaminating tap water in March, on-year growth of water sales doubled to 33.8 percent in March, from February,” said Jung Hye-young, a department head at Homeplus, another major discount store. 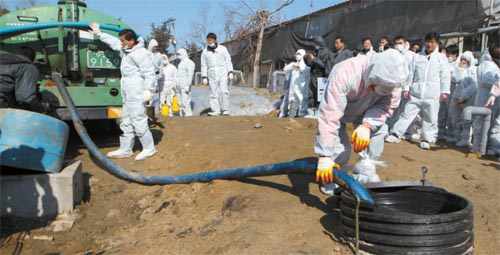 The central government has maintained its stance regarding the degree of water contamination from the FMD outbreak and news of radioactive rain. In numerous reports published since late last year, the government has said that there is no major cause for alarm about tap water.

After the FMD outbreak, the Ministry of Environment conducted an investigation into 3,000 affected areas in conjunction with the local governments of the respective regions. The ministry said it is currently conducting further investigations into the remaining 4,900 districts affected by FMD, the results of which it says will be announced sometime in May.

“So far, we haven’t found any cases of groundwater contamination from animal residue from disposal sites,” a member of the ministry said on condition of anonymity.

However, environmentalists and civic groups are critical of the central government’s initial response to and investigation of the FMD outbreak.

“It is only natural for the government to try to alleviate public concern, but the problem is that in this day and age, the public doesn’t trust a one-sided response from them anymore,” said Han Jae-wook, chairman of the Korea Environment Council.

“The fact that they chose to delay vaccinations [at livestock farms] in order to maintain Korea’s FMD-free status shows their relative ignorance about what would happen just a few months later in terms of water contamination and other environmental problems,” he said.

As the government’s response began to draw skepticism from the public, a separate investigation into the matter conducted by Yu Won-il, of the Creative Korea Party and the Korea Atomic Energy Research Institute (Kaeri), and led by head researcher Yu Seung-ho further added doubt about water safety.

In a report released late last month, Yu’s office claimed that groundwater contamination from animal carcasses had been found in Beksa Village, Icheon, in Gyeonggi.

The investigation was initiated after village residents complained to the local government about the foul smell coming from nearby disposal sites.

Yu Won-il said that news of contamination in Beksa Village is especially alarming considering that it is one of the areas where mass burials were conducted in a systematic manner according to the standards set by the central government. Also troubling is that the Kaeri investigation was conducted using the institute’s newly developed detection method, which it claims detected water pollution from dead animal residue.

“The most worrying part about this whole thing is that in Beksa, the local government office conducted the mass burials precisely according to the manual that the central government provided and still we found contamination,” Yu Seung-ho, the Kaeri researcher, said. “I have heard that even the mayor of Icheon has admitted that the town’s water has been contaminated by leachate [liquid pollution in water].”

“Looking at the results of the investigation, we can no longer trust the government’s announcement that if the burials were conducted in accordance with its manual, groundwater contamination is unlikely,” Yu Won-il wrote in the investigation report.

At present, the Environment Ministry says that its water pollution index relies on the presence of four main pollutants: ammoniacal nitrogen, nitrate nitrogen, chlorite ion and E. coli. Regarding Beksa Village, the ministry refuted the idea that the water contamination was most likely due to livestock manure or industrial pollutants.

After the Kaeri report went public, the Environment Ministry refuted the report, claiming that the institute’s methods had not been verified by the government.

“This method has already been through numerous stages of verification by experts and was even reported to the Blue House,” said Kim Se-ho, a spokesman at Yu’s office.

Based on an internal investigation conducted in February, Kim’s office reported that of the 14 bottled water factories in Gyeonggi, the drainage basins of eight factories were located in villages that conducted mass burials during the FMD outbreak. The report added that in some cases, the drainage basins were “worrisomely” close to the carcass disposal sites. The office has urged the central government to do a more thorough investigation into the potential for bottled water contamination.

According to Kim’s office, when asked about the proximity of drainage basins to burial sites, most companies they interviewed refused to give out the exact number in meters, claiming that it was “internal information.”

After the Korea JoongAng Daily asked the same question to the nation’s top five bottled water companies - Lotte Chilsung (which sells Icis brand bottle water), Seoksu and Puriss (part of Hite-Jinro Group), Pulmuone (Pulmuone Natural Mineral Water and Water Line), Samdasu and Dongwon F&B - all five companies said that the mass animal burials that followed the FMD outbreak had no effect on the safety of their bottled water.

But many company officials, including water division managers, had no idea how far apart the drainage basins for their regional factories were from the burial sites when asked.

“Experts say that leachate doesn’t usually travel sideways - that it flows south. So I believe that if the burial sites and drainage basins are some distance apart, there is little danger of water contamination,” said Shin Hye-won, a marketing manager at Pulmuone.

Despite the relatively vague responses from the major water companies, experts say that in many cases bottled water has a greater chance of being polluted in these circumstances than tap water.

“When these kinds of mass disposals take place, the soil becomes contaminated and then that contamination seeps into the groundwater beneath the soil,” said Kim Han-seung, an environmental engineering professor at Konkuk University. He added that water that flows through regional water pipelines is relatively safer than groundwater.

“Many bottled water companies use groundwater, which they then put through their own distillation process. According to experts, this process is less strictly regulated than the process for regular tap water that comes from regional water pipes,” said Kim, of the Future Hope Alliance, supporting her claim that the water from the factories her office investigated has a high probability of being contaminated due to the factories’ proximity to the carcass disposal sites.


The public in the dark

With so many theories and reports about water contamination in Korea, local water experts seem to be divided about the degree of water pollution after the FMD outbreak. But the majority of experts that the Korea JoongAng Daily interviewed seemed to agree that water contamination from animal waste is more likely in regional areas than big cities.

Yoon Je-yong, a chemical and biological engineering professor at Seoul National University, said that, for the most part, residents in major cities like Seoul don’t need to concern themselves too much about water safety, because the central water pipeline for tap water in big cities is strictly regulated.

“But in the regional townships where animals were slaughtered and buried during the FMD outbreak, it is probably very dangerous to use groundwater,” he said.

Choi Kyung-ho, an environmental toxicology professor at Seoul National University, had a similar reply. As for the divide in public and expert opinion, Choi said that the difference is natural, as there is no method for detecting water pollution that is 100 percent accurate.

“In many rural areas, residents still collect groundwater as drinking water, which can now be dangerous. And nitrate nitrogen [a pollutant from dead animal residue] is very dangerous to children,” Choi said.

Putting the facts aside, civic groups and environmental activists seem most infuriated by the government’s lack of communication with the general public on water safety.

“We asked the government in March to cooperate with us and other civic groups to come up with a comprehensive solution and analysis of the matter, but we were refused,” said Lee Cheol-jae, director of the Korea Federation for Environmental Movement.

“[The government] can’t just tell us not to worry and then keep denying the validity of all these reports. If they did something wrong, they should admit to the public and work together to find a solution.”