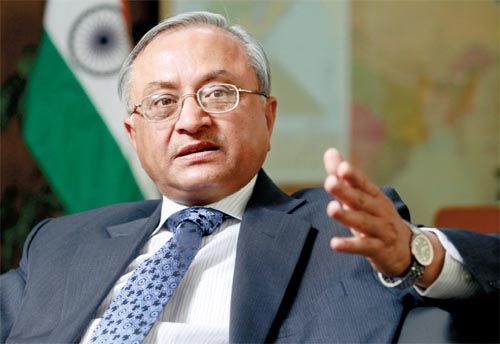 Skand Ranjan Tayal, the Indian ambassador to Korea, talks with the Korea JoongAng Daily in an interview at the Indian Embassy in Seoul on April 19. By Lee Chan-weon


India will sign a civil nuclear agreement with Korea in a matter of weeks, according to India’s top emissary in Korea.

“We are negotiating an inter-government agreement on nuclear power cooperation, which is almost in the final stage; in the coming weeks or months, it will be signed,” Indian Ambassador to Korea Skand Ranjan Tayal said in an interview at the Indian Embassy in Seoul last Tuesday.

If the agreement is reached, the civil nuclear pact will pave the way for Seoul to export nuclear power plants to the energy-hungry country, which hasn’t budged from a plan to greatly expand its nuclear power capacity despite the ongoing nuclear crisis in Japan.

Already, several nuclear powerhouses have secured positions in India, including Russia, which is building four 1,000-megawatt nuclear plants in the South Asian country. The U.S. and France are negotiating with India over nuclear plant prices and technologies based on recently-sealed deals, the ambassador said.

The ambassador said, however, that foreign countries’ participation in India’s civil nuclear power development is still “in the conceptual stage” in general, hinting that there is still plenty of room for Korea.

Tayal said there has already been contact between Kepco, Korea’s exclusive exporter of nuclear plants, and the Indian authorities for a possible nuclear plant deal.

“Our nuclear power experts and engineers have visited nuclear plants in Korea” for assessment, he said. “Things are going very well.”

Tayal said Korean nuclear power plant technology is receiving a positive assessment from India, especially given its affordability, although the final verdict is yet to be made.

“The initial reaction is that it is a very good technology and could be suitable for India, but that process is continuing,” he said.

The recent malfunction at the Gori-1 that led to Korea’s oldest nuclear reactor temporarily being shut down will not affect India’s overall assessment of the safety of Korean nuclear plants, the ambassador said, calling it a minor glitch.

His words are a good sign for Korea, which is hoping to rekindle its stalled nuclear exports’ drive after making its first deal, worth $20 billion, with the United Arab Emirates in December 2009.

Korea, the world’s sixth biggest nuclear plant operator with 21 commercial nuclear reactors, has stuck to a plan to gain a 20 percent share in the global nuclear power plants market by 2030, an ambition met with doubt after the troubled Fukushima Daiichi power plant in Japan triggered reconsideration across the world.

The ambassador said that widespread fear of radiation since the March 11 crisis at the Japanese plant has also raised concerns in India over the country’s nuclear power projects.

To address the concern, the Indian authorities are working to strengthen safety features at existing plants, Tayal said. India has 20 working nuclear plants.

Still, he said, India will pursue its plans to build more nuclear plants because nuclear power is deemed the best available source of energy for India to be able to meet the huge demand for electricity in the world’s second most populous country.

The Indian government has said it will spend $175 billion by 2030 for a 13-fold increase in its atomic power capacity.

“Eventually, by 2030, 9 percent of our total electricity will be from nuclear power. Those goals have not changed,” he said.

Nuclear power is one area, but many others could be affected by growing cooperation between Korea and India through a partnership called the Comprehensive Economic Partnership Agreement.

Since the bilateral pact took effect in January 2010, trade between the two countries has risen about 40 percent, according to the Korea International Trade Association.

India was only the 25th biggest export market for Korea in 2000, but it grew to be the seventh last year.

Last year, Korean products accounted for 3 percent off all imported products in India, trailing China’s 10.7 percent. But Korea was ahead of Japan’s 2.3 percent and Taiwan’s 0.9 percent, KITA data showed.

The ambassador said that based on the CEPA, Korea and India can find each other to be more mutually complementary.

“We look at how we can have more and more such relationships between our industries and manufacturers and service sectors,” Tayal said. “It is not just a buyer-and-seller relationship, but it’s more like an economic partnership. That is a direction we are trying to go in.”

The growth in economic relationships is credited not just to the CEPA, said the ambassador, adding that Korean companies such as Samsung, LG and Hyundai Motor have done well in India for many years, adapting to local preferences.

The manufacture of laundry machines that can start from the stage they stop, not from the beginning, when hit by a blackout, is a small, but much-appreciated Korean innovation for many Indians suffering from frequent shortages of electricity, Tayal said.

Likewise, cars with higher ceilings that provide more space to Indians who wear turbans and a refrigerator whose vegetable compartment has been enlarged, reflecting the high consumption of vegetables in the country, show how much Korean companies have tried to localize in India - and with success, he said.

Tayal said Korean products are also viewed more positively than rivals including China for quality and price, the crucial point for the majority of Indian buyers.

But the ambassador also said Korean companies need to do more to enjoy a more secure position in India, and suggested the building of more factories and facilities in the country.