A melodic chorus for Pyeongchang

A melodic chorus for Pyeongchang 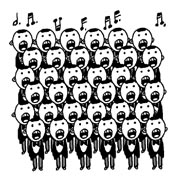 In the 18th century, Europeans believed that the human voice was the finest musical instrument for worshipping God, especially when accompanied by musical instruments. So vocal music had a comparative advantage over other genres of music.

The first work to combine vocal music with instrumental music was Beethoven’s Symphony No. 9. Because Beethoven wanted to include the words from Friedrich Schiller’s poem “Ode to Joy” in his symphony, it was a masterpiece that took him 30 years to complete.

Handel’s Messiah also has several prominent choral passages. Among them, Halleluiah is the most well known. When it premiered in Dublin in 1742, King George II of England unwittingly stood up upon hearing the music. Since then, it has become a tradition for the entire audience to stand up during the Halleluiah chorus.

The word “chorus” originated from the Greek word “choros.” Depending on the composition of the vocal group, they are divided into a children’s choir, a male chorus, a female chorus and a mixed chorus. The most typical form is a mixed quartet of soprano, alto, tenor and bass vocalists. In general, a chorus is accompanied by a piano or other instruments, but an unaccompanied chorus sings a cappella.

In Korea, the addition of the chorus to pieces of music was spread by foreign missionaries. After Korea’s liberation from Japanese colonial rule in 1945, choirs were created at schools, churches and offices for leisure and unity.

The chorus gives a feeling of unity and is a wellspring of emotion. It is also an artistic tool used in the theater to convey the wishes of the people.

The Grand National Chorus of 100,000 People, which will convey Korea’s wish for the 2018 Winter Olympics to be held in Pyeongchang, is scheduled for May 14. The performance, conducted by Maestro Chung Myung-hun, will be held simultaneously at Seoul Plaza, Alpensia Resort in Yongpyeong and New York at 7 p.m. KST. It is also expected to be recognized by the Guinness World Records as the world’s largest chorus. Many people will participate in the event, including K-pop stars like Girls’ Generation. World Harmony, the organizer, plans to dispatch a choir of selected singers to Durban, South Africa, where the host city of the 2018 Winter Olympics will be chosen on July 6. I hope that the grand chorus will bring good news for Pyeongchang.