Greater recognition for graffiti as art

Greater recognition for graffiti as art 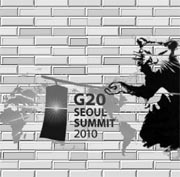 Banksy is a well-known British graffiti artist known for criticizing war, violence, government, political power, capitalism and consumerism through his work. His graffiti pieces have been purchased by celebrities such as Angelina Jolie and Christina Aguillera and he has been called “the Damien Hirst of graffiti art,” after the English artist who became famous for his controversial works of art.

Graffiti comes from the Italian word “graffito,” which means to inscribe by scratching. Along with hip-hop, it is part of an underground culture that developed in New York in the 1970s.

Although graffiti is now recognized as art, the act of painting on property without the consent of the owner is a punishable crime.

Banksy, who reportedly started writing at the age of 14, keeps his identity under wraps to protect himself from arrest, and little is known about him except that he is a Caucasian born in 1974. In the two years from 1977, he painted more than 900 pieces of graffiti that lampooned the anonymity of urban life. In 1980, a Swiss court sentenced him to nine months in jail and imposed a fine. At that time, graffiti was considered to be closer to an act of vandalism that violated law and order.

But in 2005, Banksy painted nine graffiti pieces on the segregation wall in Palestine that were critical of Israel. When the wall was repainted, Bansky’s works were preserved because graffiti had finally been recognized as art.

A university lecturer from Korea who spray painted a mouse on a G-20 poster was recently sentenced to 10 months in jail. The work is said to have been a parody of a similar one done by Bansky. Filmmakers Lee Chang-dong, Park Chan-wook and Bong Joon-ho filed a petition demanding the court grant the Korean lecturer clemency and allow him to exercise his freedom of expression. If he damaged property, either private or public, he should be held responsible. If the artistic aspects of his work are overlooked, however, the court’s decision is anachronistic.

We in Korea should do the same. After all, we live in the 21st century, in a world that emphasizes tolerance and communication.