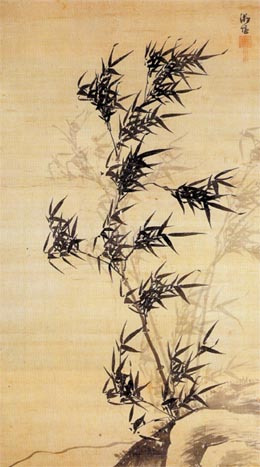 For those who haven’t heard the story of Korean painter Lee Jeong, whose pen name is Taneun, Lee’s well-known series of bamboo paintings might just look like a bunch of insignificant, black-and-white drawings of bamboo trees. Upon closer inspection, however, the drawings reveal much more.

As a prominent painter active during the mid-Joseon 16th century, Lee Jeong was heavily influenced by the Chinese art of the era. Among his still-lifes, he was most recognized for distinct paintings of bamboo trees that were praised for their artful symmetry and for conveying the strength and virtue of Joseon era scholars and the military.

In one of his most recognized bamboo paintings, “Pungjuk,” meaning bamboo swaying in the wind, a single bamboo tree stands in the center of the painting and the leaves tilt toward the right.

Each leaf is drawn with strength and together they all point in a single direction. While short in length, the leaves appear to be quite sturdy, as though fighting the forces of nature confronting them.

According to Choi Wan-su, head researcher at the Kangsong Art Museum’s Center for the Study of Korean Arts, the strength of Lee’s bamboo paintings originates from his triumph in overcoming a serious knife wound during the Imjin War (the Japanese invasion of Korea in 1592).

“Among all of Taneun’s works, ‘Pungjuk’ shows off the height of his talent by balancing subtlety and strength,” Choi said.

“Yeomhwachwisil” by Kim Jeong-hee, top; “Baekmae” by Kim Hong-do, middle; and “Ohsanggojeol” by Shim Sa-jeong, above, are part of a new exhibition at Kansong Art Museum in Seongbuk District in northern Seoul called “Sagunja” (“Four noble plants: plum blossom, orchid, chrysanthemum and bamboo”) that runs from Monday through May 29. Provided by Kansong Art Museum

Taneun’s works will be featured in an exhibition that runs from Monday through May 29 at Kansong Art Museum. The exhibition includes around 100 Korean paintings under the theme of “sagunja,” or “four noble plants.”

The four plants are plum blossom, orchid, chrysanthemum and bamboo, and have remained an important theme in Asian still-life paintings.

These “noble” plants and their characteristics are said to have something in common with human virtue, including righteousness, strength, purity and modesty.

Kansong Art Museum, in Seongbuk District, northern Seoul, has held two exhibitions every year - one in May and one in October - for 40 years since its opening in 1966. This exhibition of “sagunja” paintings will be its 80th.

Although the museum held two “sagunja” exhibitions in the past, the organizers say this will be its biggest in terms of scale. Bamboo paintings will make up the largest part of the exhibition, followed by plum blossom, orchid and chrysanthemum paintings.

“We saw this exhibition as a chance for us to review our previous sagunja painting exhibitions,” Choi said. “This time, we have picked key sagunja paintings that were crucial in influencing the development of the Joseon-era literati.”

Among Korean orchid painters, Kim Jeung-hee, whose pen name is Chusa, is often referred to as the master of the genre. Three of his most beloved orchid paintings will be featured in the exhibition, along with orchid paintings by Kim’s students.

“Orchids often grow and blossom in barren soil. Because of this, they have a gaunt sort of feminine beauty,” Choi said. “While Chusa’s orchid paintings depict this element of orchids well, you can see that the paintings by some of his students don’t come close to his mastery of the form. Some of the orchids look as fancy as lilacs.”

Another highlight of the exhibition will be two paintings by painter Kim Hong-do, pen name Tanwon, perhaps one the most familiar names among Joseon-era painters for Koreans today.

Although Kim was most recognized for his paintings of common people and his critical depictions of the upper class, he was also an accomplished landscape artist and still-life painter as well. During this exhibition, “Baekmae,” Kim’s painting of a plum blossom tree, as well as a bamboo painting titled “Sinjukhamro,” will be featured.

*The “Sagunja” (“Four noble plants: plum blossom, orchid, chrysanthemum and bamboo”) exhibition will be held from Monday through May 29 at Kansong Art Museum.