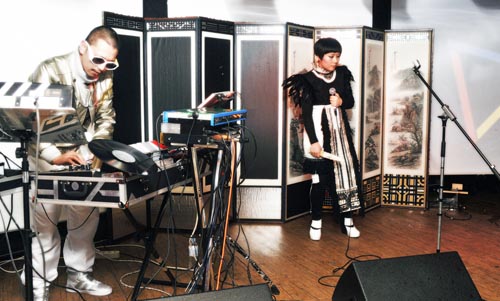 
Although musicians have tried mixing traditional Korean music with Western elements, not many have experimented with pansori, the theatrical narrative singing style for a solo singer and a drummer.

Enter Ninano-Nanda. The duo, whose name means “great joy comes,” aims to mix pansori with electronica to create a new sound. They released their first album, “Future Pansori: Song of Space,” in March.

As with traditional pansori, the duo consists of a singer called a sorikkun and a drummer called a gosu.

In Ninano-Nanda, the sorikkun is Jang Goon, who has sung various kinds of music including reggae. The gosu is D.J. Shin Hang, who functions as both a sound engineer, mixing live and recorded sound and drummer.

The two met in October 2009 by chance at a dinner. As they talked, they realized that they both had an interest in linking Korean with Western music and independent music with commercial music. After becoming a duo a year ago, they started work on their first album, working day and night in their studio in Mangwon, central Seoul.

“We went back and forth, just as in pansori, where the gosu plays the drum after observing how the sorikkun feels,” said Shin Hang. “I would play a certain beat and then Jang Goon would hum a melody. After repeating that several times, we would add the lyrics and edit the song. It was like a jam session.”

The album consists of 10 songs. Each song can be heard independently but the album also tells a story about humans meeting “aliens” and living together in peace.

“By ‘aliens,’ we mean creatures from other planets but also foreigners and any creature that is considered different,” Shin Hang said.

The third song “Message from the Universe” relays the core message of Ninano-nanda’s philosophy and their first album. With electronic music as background, Jang Goon begins by reciting the words “humans,” “earth,” “freedom” and “love.”

“I talk more than I sing in the song,” Jang Goon said. “I wanted to remind people that money cannot buy everything - it cannot buy starlight or wind. Money is important for living but it is not the most important thing. I wanted to say that we need to dream hard and be happy even when we don’t have money.”

“It could mean the year 2020 but I was referring to the D.J. machine AD 2020, which every D.J. uses in the last phase of the production process,” Shin Hang said. “Though I didn’t use the machine in the song.”

Except for the seventh and tenth songs, the tracks were recorded on the spot and then laid down without editing, as the duo wanted their music to be intuitive rather than planned.

“We wanted to produce new music,” Shin Hang said. “There is already so much good music produced for a cost of like 20 million won ($18,500). We wanted the creative process to be as if children were playing with music, following their feelings and believing in themselves.”

In their pursuit of a new sound, Ninano-nanda even created new instruments. Shin Hang made a folding screen that sounds like a drum when hit.

“We also use a broken guitar we found in the street,” Jang Goon said. “When we saw it, we wondered what the sound of an abandoned guitar would be like.”

In addition to playing as a duo, Jang Goon and Shin Hang also invite other artists to play with them. They invited modern dance choreographer Ahn Ji-suk to perform with them at their album release concert on March 29.

Helping others is also important to the duo. All the proceeds from the show were donated to victims of the Japanese earthquake.

“We sing about love and peace among different creatures in the world, so we plan to donate to the needy as much as we can,” Shin Hang said. “And playing old, broken instruments could also be viewed as a ‘sustainable’ way of producing music.”

The duo is planning to release a digital single soon. It will be titled “C’est la Vie,” meaning “That’s life.”

“Our first album might sound difficult at first since we wanted to try new methods of producing music and playing different sounds,” Jang Goon said. “But our goal is to spread a message of love and hope to our listeners, so I hope people will listen.”