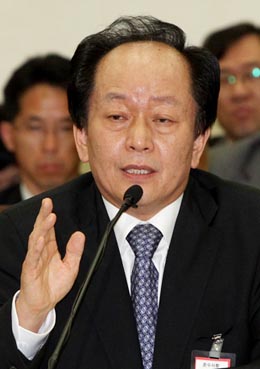 The National Assembly began a week of confirmation hearings yesterday with the grilling of President Lee Myung-bak’s nominee for agriculture minister over his ethics qualification.

On May 6, Lee replaced five ministers in a shuffle prompted by the ruling Grand National Party’s rout in last month’s by-elections. Claiming that all five nominees were unfit, corrupt figures, the opposition Democratic Party has vowed to question them harshly at confirmation hearings to force them to drop out.

Suh Kyu-yong, named to head the Ministry for Food, Agriculture, Forestry and Fisheries, faced a confirmation hearing yesterday and the Democrats grilled him over the suspicion that he had unlawfully received government subsidies for rice farming. Tax evasion and illegal transfer of wealth to his son were also alleged.

The DP said Suh had unlawfully received a total of nearly 600,000 won ($546) of rice farming subsidies from the government in 2007 and 2008, although he had not actually farmed his land in Cheongju, North Chungcheong.

Suh denied both allegations, claiming that he had actually farmed the land on weekends and holidays with the help of his brother. Suh’s residence is in Seoul.

He also said the rice paddies were farmed for more than eight years, including the time that his father had worked there, rejecting the DP’s accusations.

The lawmakers from both ruling and opposition parties, however, were not easygoing with Suh.

“It is problematic that you had created the program when you were serving the ministry and later received it through a process that lacks transparency,” GNP lawmaker Kang Suk-ho said. The rice farming subsidy program was introduced when Suh was serving as the vice minister of agriculture in 2002.

Representative Ryu Keun-chan of the Liberty Forward Party also condemned Suh for having insulted 500,000 farmers by abusing the policy and receiving money by visiting the farm as if it were a weekend leisure activity.

“I had received the subsidy legitimately but I realized that I should have made a more prudent judgment,” Suh then said.

The rice farming subsidy system has been abused by many high-income earners of urban cities including ranking public servants, politicians, state-run company executives and journalists who own rural land but do not actually farm the rice paddies on their own. After Lee’s vice minister for health and welfare, Lee Bong-hwa, resigned over the scandal, a massive investigation took place in 2008 to reveal those who have lined their pockets with the money intended to support low-income farmers.

The DP also accused Suh of evading the gift tax when he provided 270 million won to his son for a jeonse housing deposit.

The confirmation hearing of Suh was the first in a series of sessions that will take place this week, where four more minister nominees will be questioned.

The hearings are also considered as the first exam of the political capabilities of DP’s new floor leader Kim Jin-pyo. Under the leadership of his predecessor, Park Jie-won, the Democrats had successfully blocked some minister-designates of President Lee to assume the posts by uncovering skeletons in their closets.

Since the launch of the Lee administration, eight of Lee’s nominees for top government posts have failed to pass the confirmation hearings.

“I cannot understand why all minister designates of the Lee administration are all marred with corruption scandals,” Kim said Sunday, criticizing the president’s personnel appointment style. “It is the DP’s goal to recall all five minister nominees. If they don’t bow out, the people will recall the Lee government.”