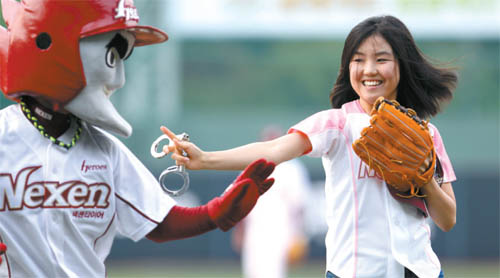 Park Gippeum, 32, a judge with the Seoul Southern District Court, right, tries to handcuff Nexen Heroes mascot Tukdori after it attempted to hug her at Mokdong Baseball Stadium in Seoul on Tuesday. Park was chosen to throw out the ceremonial first pitch via a lottery that included other court employees who were invited to watch the baseball game between the Heroes and the Kia Tigers. [JoongAng Ilbo]