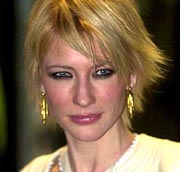 LONDON - London’s Barbican Centre will bring Oscar-winning actresses Juliette Binoche and Cate Blanchett to the big stage in 2012 in a bumper crop of performers to coincide with the summer Olympics.

French star Binoche, who won an Academy Award for “The English Patient,” will appear in “Mademoiselle Julie” in September 2012, the theatre and music venue announced on Wednesday.

Australian Blanchett, who won for “The Aviator,” stars as Lotte in “Gross Und Klein” by German playwright Botho Strauss in April.

“Like [Lewis] Carroll’s Alice, sometimes Lotte is too big for her surroundings and sometimes too small to be noticed within them,” the Barbican’s description said.

There will be a U.K. premiere for Robert Wilson and Philip Glass’s rarely performed “Einstein on the Beach, An Opera in Four Acts,” and Jazz at Lincoln Center Orchestra will be in residence. There will be the biggest British exhibition in 40 years dedicated to modern art movement Bauhaus featuring works from Walter Gropius, Paul Klee and Mies van der Rohe.