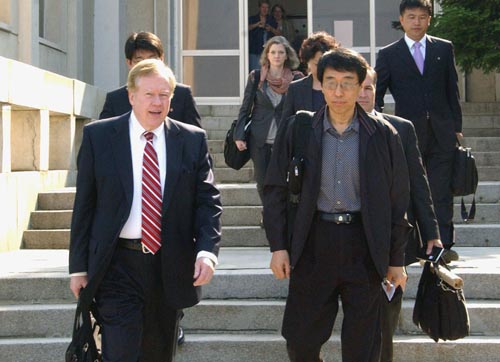 American citizen Jun Young-su, right, walks with U.S. human rights envoy Robert King, left, after his release in Pyongyang Saturday, in this picture released by the North’s Korean Central News Agency. King was in North Korea on a visit to assess the reclusive country’s pleas for food aid. [YONHAP]


BEIJING/INCHEON - U.S. human rights envoy Robert King flew out of North Korea on Saturday after winning the release of an American citizen under detention there for six months.

Upon arrival in Beijing, King confirmed the release of Korean-American Jun Young-su by North Korea. Although the two were on the same flight out of North Korea, Jun was not seen at Beijing Airport’s arrival gate. Later, he showed up in Seoul. Jun’s release came a day after North Korea said it decided to set him free on “humanitarian grounds.” Jun was arrested in November for committing an “unspecified crime” against the North, according to North Korean media reports.

Jun was met at Incheon International Airport by U.S. Embassy and South Korean officials and headed to a hospital for a medical checkup. Dressed in a black jacket and casual trousers, he appeared relatively healthy.

“I have to go to hospital. Let me talk later,” Jun briefly told reporters.

Earlier in Beijing, King, the U.S. envoy on North Korean human rights, told reporters, “We are very happy to report that Mr. Jun, the American citizen being held in Pyongyang, has been released. We are also delighted that in a day or two he will be back with his wife and family.”

The U.S. government had repeatedly called on the North to free Jun, the fifth American held by the communist regime in the past three years. Sources in the U.S. and South Korea have claimed he was suspected of getting involved in unauthorized religious activities.

Earlier in the day, the North’s KCNA news agency said in a brief report that King and his team left Pyongyang by air after discussing “humanitarian issues” during the visit, but made no mention of Jun.

King visited North Korea this week to assess the North’s food situation, a possible indication that the U.S. may resume food aid to the North. However, the envoy told reporters in Beijing that there was no agreement on U.S. food aid during the visit.

Washington suspended its food aid to the North in March 2009 amid heightened tensions over Pyongyang’s nuclear and missile tests, and controversy over the transparency of food distribution. In March, the U.N. food agency appealed for 430,000 tons of food aid to feed 6 million vulnerable North Korean people, a quarter of the country’s population.