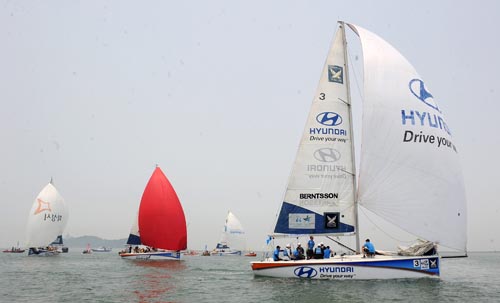 Yachts sail on the Yellow Sea near Jeongok Marina off Hwaseong, Gyeonggi, yesterday, as a part of pro-am event of the 2011 Korea Match Cup, which begins today and lasts until Sunday. The Korea Match Cup is a spin-off of the World Match Racing Tour that goes around nine countries. This year, a total of 12 racing teams from Korea, Sweden, France, Australia, the United Kingdom and Italy will compete for a 330 million won ($301,783) prize. [YONHAP]