His goal: Bringing Korea and Brazil close together

His goal: Bringing Korea and Brazil close together 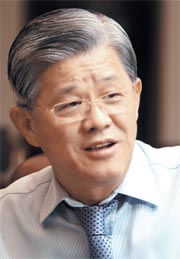 The Korea-Brazil Society (Kobras) had its official launch on Friday, with about a hundred guests attending the event at the Sheraton Grande Walkerhill in eastern Seoul. Kobras is a private organization meant to boost exchanges and cooperation between the two countries.

Among those attending were Democratic Party member Won Hye-young, president of the Korea-Brazil Assemblyman Friendship Association; Brazilian Ambassador to Korea Edmundo Fujita; and Jang Keun-ho, chief of the Central and South America department at the Ministry of Foreign Affairs and Trade.

“Brazil is the country of opportunity - the fifth-largest country in the world in terms of population, as well as having an immense territory and abundant natural resources. It’s the country that will hold the World Cup in 2014 and the Olympics in 2016. But the activities from private organizations that connect the two nations have been weak,” said Choi Shin-won, 59, chairman of SKC, who was named president of Kobras.

In an interview with the JoongAng Ilbo, Choi explained the significance of the new organization.


Q. What kind of activities will Kobras engage in?

A. Kobras will cooperate with organizations, groups and enterprises concerned with Brazil and organize cultural events, seminars and provide diverse information to help strengthen the ties between the two countries.

We’ll especially focus on cultural exchanges and make efforts to support Korean companies to enter into the Brazilian market. Korea and Brazil established diplomatic ties with each other more than 50 years ago, and there are currently about 50,000 Koreans residing in Brazil. We also plan to support overseas Koreans in Brazil.

In the mid-1990s, I was working as a person in charge of the overseas division at Sunkyung Corporation, which is now known as SK Networks. And during the time, I had a chance to visit Brazil and I was shocked to see the vast territory of Brazil and its abundant resources. I saw opportunities. It is located far away from Korea, but I saw it as the land of opportunity.

What are some detailed projects of Kobras?

As it is our first year, we’ll take it slowly, step by step. We are currently considering providing support for a photo exhibition of a Brazilian photographer, organized by the Brazilian Embassy. And recently, Korean pop songs have been gaining popularity in Europe, so we also hope to introduce K-pop in Brazil as well.

As an entrepreneur, how do you see Brazil as a market?

The economic size of the Brazilian state of Sao Paulo is comparable to the total economic size of Argentina. It definitely has a great potential of development. Kobras will also make efforts to support the establishment of small- and medium-sized enterprises that have difficulty in making inroads in Brazil.