It was another Friday night in Seoul as 35-year-old office worker Moon Se-hwan walked arm-in-arm with two co-workers around the Hongdae area in western Seoul. Red-faced and seemingly a bit tipsy from drinking soju, the three wandered into Luxury Su Noraebang.

“I’ve been working for almost 10 years, and going to noraebang, [Korean singing room], after a company dinner is an all-too-familiar routine for me now,” Moon said as he selected a song to sing.

“When I was a kid in 1980s Korea, it was rare for anyone to sing in a group setting. But I think the popularity of noraebang during the 90s changed the culture, and singing together has become an acceptable, popular pastime for adults.”

This year marks the 20th anniversary of the noraebang in Korea. Stemming from Japanese karaoke, the noraebang phenomenon here began in 1991 at a small arcade in Busan called Royal Arcade.


The beginnings of a national phenomenon

According to industry experts, the owner of Royal Arcade, Hyeong Chung-dang, was the first person in Korea to convert a Japanese karaoke machine into the noraebang machine of today.

The standard karaoke machine of the time consisted of a music player and microphone with the lyrics appearing on a separate screen, and the system was operated by someone other than the singer.

Hyeong’s machine combined the music player and screen with a song selection program and users could operate the machine themselves by typing in the number of the song they wanted to sing.

Hyeong made three such machines and set them up in small rooms within his arcade. Users paid 300 won for one song. The machine was a hit and led to the opening of singing room businesses around the country. Somewhere along the way, these establishments came to be known as “noraebang.”

The popularity of noraebang spread so quickly and so far that the same year Hyeong installed his machines at Royal Arcade, more than 10,000 noraebang sprang up in Korea.

“Our noraebang machines were selling so fast that we could hardly meet the demand,” said Kim Seung-dae, who helped develop the new machines at Assa 20 years ago.


More than a singing room 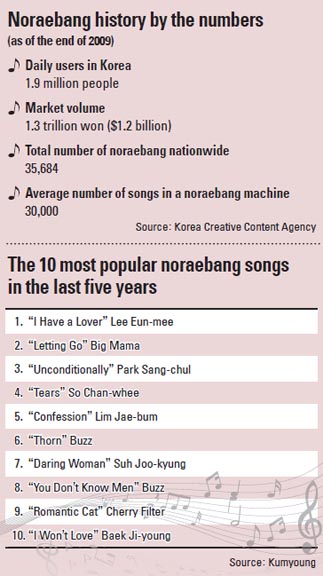 For Koreans, noraebang has become much more than a room with a music player. In fact, singing rooms have changed the way people appreciate music, and people have gone from mostly just listening to music to actually singing the songs, said Kim Yeon-soo, a culture critic and professor at Dankook University’s culture and arts department.

“I think noraebang blossomed in Korea because here, as well as in many parts of Asia, there is a strong tendency to do things in groups, a collectivism of sorts. In Europe or North America, the culture focuses more on individualism,” he said. “You can go to a club by yourself, but you can’t go to a noraebang alone.”

Choi Jin, a cultural studies professor at Suwon Women’s College, has another theory on why noraebang became so big in Korea.

“When noraebang took off here, most of the people who went were teenagers or people in their early 20s,” said Choi.

“Back then, there weren’t a lot of places for young people to go that weren’t centered on drinking. Therefore, noraebang became a safe, fun place for these youngsters to go together.”

Maintaining its status as an ever-popular pastime, noraebang is also serious business. It’s an industry worth more than 1.3 trillion won ($1.2 billion) in Korea, according to the Korea Creative Content Agency. Every day, a total of about 1.9 million people go to 35,684 noraebang in Korea, good for a daily average of roughly 54 people per noraebang, according to Kocca’s latest data.

“The noraebang market in Korea is now close to saturation, so since 2003 we’ve been concentrating on exporting our noraebang machines to other Asian countries, including Japan, Vietnam, Thailand and the Philippines,” said Hwang Kyu-yeon, the marketing director for TJ Media, another noraebang machine maker.

The majority of noraebang machines are made by TJ Media and Kumyoung. Kumyoung and TJ Media started exporting machines in 2003 and 2004, respectively.

“Ironically, one of the most lucrative countries for us in terms of noraebang machine exports is Japan,” said Kim Jin-koan, a Kumyoung manager.

A noraebang machine from 1992, left, and another from 2010. Provided by Kumyoung

Just as with Moon and his co-workers, noraebang has become an integral part of a typical hoesik, or company outing. After co-workers eat dinner, usually with alcohol, the common custom in Korea is to go to a noraebang and sing together. The goal is to build camaraderie and goodwill.

Singing in a room together might feel like second nature to Koreans, but for many foreigners who come here, it’s a strange yet interesting activity that provides a unique insight into the country.

“It’s like singing your heart out in the shower, except that you’re in front of your friends or colleagues and your clothes are on,” said Elizabeth Groeschen, an American who has lived in Korea for more than four years.

A part-time photographer, Groeschen said she based a whole photo series around noraebang in Korea, in particular, noraebang screens.

“Korea is a country where everyone works incredibly hard. Going to noraebang is an escape. For a couple of hours, you can forget about everything and turn your attention to belting out ‘Bohemian Rhapsody,’ playing the tambourine or simply watching all of your friends turn into complete idiots with microphones.”

For Simon and Martina Stawski, a married Canadian couple who created and runs the popular Korean culture blog www.eatyourkimchi.com, the privacy of having your own room makes noraebang much more accessible than the karaoke bars in other countries.

“We’ve been to karaoke in Canada, and singing in front of strangers is a lot more intimidating. The privacy and comfort of having your own room makes noraebang far superior,” Simon said.

Experts warn, however, that the culture that has arisen around noraebang, which succeeded because of its wholesome entertainment value, has started to deteriorate into adult entertainment with female doumi, or “helpers,” and illegal liquor sales.

“Before noraebang started opening, most Japanese karaoke bars served alcohol and targeted office workers. But it was the noraebang that provided a fun, musical outlet for teenagers and even children with their parents,” Choi said.

For Rob Ouwehand, a Korean studies major who has lived in Korea since 2003, it was the presence of the doumi that almost turned him off when he was first introduced to noraebang.

“The first neighborhood I lived in was Bangi-dong, near a ‘business club’ area, and my old boss would take us out drinking. Once all of our female coworkers had gone home, he would hire doumi girls to come in and sit with us,” he said.

“I never quite knew what to do about that because I wasn’t used to that kind of thing. [The Doumi] would just sit, blush, look at their feet and say ‘sorry.’ All the doors to the noraebang there looked like dragons or monsters.”


What’s next for noraebang?

“We used to make machines that used the real instrumental track that singers had on their albums but we don’t anymore because then noraebang customers can’t switch keys or change the rhythm to a song as easily,” said Kim from Kumyoung.

Both TJ Media and Kumyoung have also developed noraebang apps for smartphones that provide background music and lyrics.

The companies say the future of noraebang machines now lies in their connectivity with the Internet, giving them access to a multitude of songs.

“The Noraebang market is actually quite stable because people will never grow tired of singing. People like myself try to make the background music as authentic as we can using new technology. We try to help people forget about their stressful lives for a moment so they can feel free to act silly for a while,” said Hwang from TJ Media.