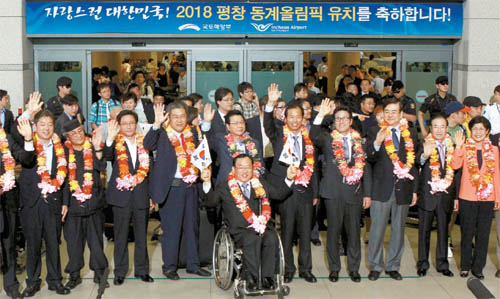 The delegation for Pyeongchang’s bid to host the 2018 Winter Olympics wave to the welcoming crowd and news crews yesterday at Incheon International Airport upon their arrival back at home after success in Durban, South Africa. By Kang Jung-hyun


The governing and opposition parties yesterday agreed to pass a law to assist in Pyeongchang’s hosting of the 2018 Winter Olympics.

Hwang Woo-yea, the floor leader of the ruling Grand National Party, and his counterpart of the major opposition Democratic Party, Kim Jin-pyo, had a meeting at the National Assembly yesterday to agree over the enactment of the special law on assistance for the 2018 Pyeongchang Olympics, spokesmen of the two parties, Lee Doo-ah and Hong Young-pyo, respectively, said at a briefing.

The special law, as the two parties envisage, will include designating special zones in Gangwon to draw private investment to the Olympics sites and providing investors with tax and nontax benefits, equivalent of the benefits given to the investors in the country’s free economic zones.

Pyeongchang won in its third bid to host the Winter Games as the International Olympic Committee chose it over Germany’s Munich and France’s Annecy in Durban on Wednesday.

The special committee for assisting the Pyeongchang games and Korea’s Winter Olympics sports will also deal with budget assistance regarding the construction of Winter Olympics infrastructure in Pyeongchang, which the government has promised to the IOC.

On Thursday, the government and the GNP held a meeting in Pyeongchang and agreed to form a special committee to help develop Gangwon.

The two parties yesterday also agreed to work together to field a unified Korean team at the Pyeongchang games, although it is seen as improbable, given the current inter-Korean conflicts.

The DP demanded that the GNP also cooperate on realizing a meeting of lawmakers between the two Koreas as a way of promoting the Pyeongchang Olympics as a peace Olympics. But, the GNP only agreed with the DP to further discuss it.