Unbeknownst to the casual commuter, the names of Seoul’s subway stations provide a lens into Korean history and its legends and lore.

Last week brought you the tales of subway lines No. 1 to 4. And in this concluding article, we take a tour of lines No. 5 to 8. 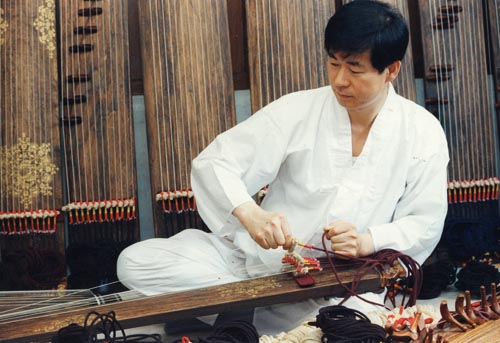 Ogeum Station (line No. 5) refers to Korea’s traditional stringed zither, geomungo, which is made of oak trees. The area, where a lot of oak trees grew, was named Ogeum, and accordingly, many geomungo artisans lived there. Above, craftsman Go Heung-gon makes a geomungo. [JoongAng Ilbo]

Mount Ujang was the site of rituals calling for rain. Upon completion of the rain-summoning ceremonies, it was said to immediately begin raining. For this reason, participants in the rituals climbed the mountain with rainwear at the ready. Ujang means rain gear, rainwear or rain coat.

The origins of Jongno’s name won’t come as a mystery if you know of the large bell pavilion, Bosingak, in this district. Jongno means bell street, and during the Joseon Dynasty, the bell signaled the opening and closing of Seoul’s four major gates in the morning and the evening. Today, the bell is usually only rung on New Year’s Eve.

The king and his retinue were once said to have stayed at a farm in the area on their way to conduct official duties. That night the queen, heavily pregnant and accompanying the king, gave birth to a baby boy. The area was renamed Gunja, which means a king’s son.

Ogeum has two possible etymological origins: geomungo, a traditional stringed zither made of oak trees, and the backs of your knees. The first theory stems from the large number of oak trees that were once said to be in the area, drawing many geomungo artisans. The second refers to a story about King Injo. While climbing a hill in the area to flee to Namhansanseong Fortress, the king was said to have felt a sudden pain in the backs of his knees.

Meaning falcon rock (am means rock), Eungam refers to a large boulder on the edge of nearby Mount Baekryeon that’s shaped like a falcon. It is said that hunters set up camp on top of the mountain to catch their quarry around the rock.

This station’s name comes from a large grain storage facility that was used to store crops collected as taxes. Rice and soybeans collected from provinces such as Gyeonggi were stored here and then distributed to government officials as a stipend. The facility was so huge that 2,660,000 kilograms of rice and 2,520,000 kilograms of soybeans could be stored at one time.

Until the reign of King Gojong in the Joseon Dynasty, this area was sparsely populated as it was covered by thick forests and weeds. Nok is the color green while sa refers to a perennial plant. As pyeong means a flat area, a term that’s still used today in real estate, the name means a flat area with green plants.

Once home to a group of shamans who lived together, the Sindang-dong area means a house of god. But because sin in Korean can mean either new or a god and dang means house, Sindang could also be referring to the establishment of the new town for the shamans.

It sounds like a strange name for a village, but Dolgoji means a skewer made of stone, and it came from the name of the area, Seokgwan-dong. One range of Mount Cheonjang, situated to the east of the area, has black rocks along the ridge that are in the shape of a rod skewering a red bean rice cake. The area was named Dolgoji, which in Chinese characters is Seokgwan-dong.

A mok is an ink stick, a type of solid ink traditionally used in East Asia for ink and wash painting. Historically, it is considered one of a scholar’s four precious possessions, along with paper, brushes or pens, and an inkstone. Mok was produced in great quantity in this area during the Joseon Dynasty, giving rise to the area’s moniker as ink town. Another theory suggests that the area was deliberately named after the ink stick to encourage the town’s prosperity and development.

You might have seen the exaggerated face of a jangseung, a tall wooden totem pole, in your travels in Korea. Jangseung served as signposts to mark distances as well as representing a village deity to drive away evil spirits. The site where a jangseung was placed was usually called jangseungbaegi. The area was given this name because of the tragic story of King Jeongjo of the late Joseon Dynasty.

Jeongjo’s father, the late Crown Prince Sado, had been killed by his father, King Yeongjo, who sealed him alive in a rice chest where he died eight days later. Sado’s death is still controversial - whether it was the result of his own violent behavior, caused by mental illness or if he was framed in a political conspiracy.

On his way to pay respects to his father one year, Jeongjo came to this wooded area. His sorrow and grief led him place many jangseung in the area to keep him company.

A boramae is a young falcon less than one year old that is specially trained for hunting. It is also the symbol of the Korea Air Force Academy, which was once located in the current Boramae Park. Although the academy has since moved to Cheongju, North Chungcheong, this area is named Boramae to commemorate the Air Force. 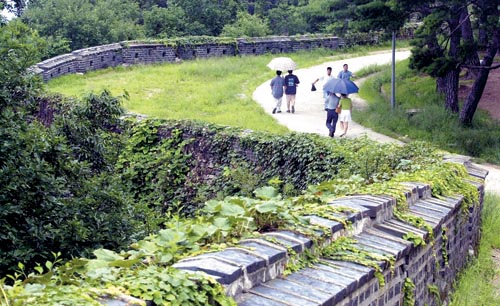 Legend says that King Injo of the Joseon Dynasty climbed Namhansanseong Fortress (above) where he found a well with the most delicious and refreshing water. That well, called Munjeong, became the name of the area and the name of the subway station on line No. 8. [JoongAng Ilbo]

When Qing troops invaded Joseon during the Manchu War in 1636, residents in this area moved stones to build strongholds. Huge piles of stones were collected here, leading people to call the town Seokchon, the town of stones.

According to legend, King Injo fled to Namhansanseong Fortress to avoid the attack of Qing soldiers. While climbing toward the fortress, the king found a well with the most delicious and refreshing water. Jeong in Munjeong refers to a well, and Mun is a family name that was common in the area. So Munjeong, or Mun’s well, became the area’s name.


While only a glimpse into the etymological origins of some of Seoul’s well-known subway stations, what becomes clear is the important role of legends and lore in Korean culture and history.

Next time you pass through one of these stations, take some time to think about the origins of some of these names, and delight your friends with a good tale or two.