Death and love without the drama in director’s debut

Death and love without the drama in director’s debut 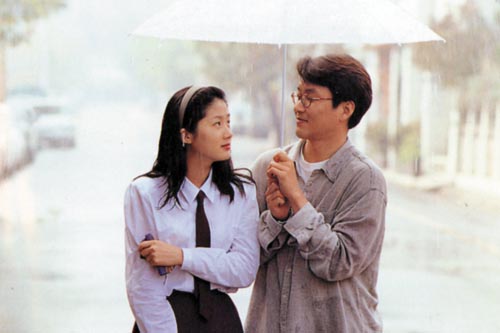 A scene from Hur Jin-ho’s “Christmas in August.” [JoongAng Ilbo]


Around this time every year when it’s pouring outside, I find myself taking out my copy of “Christmas in August” to rewatch a particular scene.

Da-rim (Shim Eun-ha), a traffic officer, bumps into an umbrella-less Jung-won (Han Suk-kyu), a photography shop owner, on the street on a rainy day. She offers to walk him to his shop. He says thank you and she teases that this service is not for free and that he should buy her a drink after he finishes work.

They had talked a few times before this moment, but they are still new to each other. At first, she holds the umbrella up, leaning it towards Jung-won while her right half gets soaked. Jung-won then gently takes the umbrella and tilts it toward Da-rim, just slightly, so she won’t feel bad.

No words are spoken throughout this interaction, but Da-rim’s secretive smile says it all - she’s in.

In his debut feature “Christmas in August,” director Hur Jin-ho manages to orchestrate an understated poignancy in a story that could have potentially turned into a morbid mess. In fact, it’s a bit odd how much I enjoy this film given that I rarely go for the “dying person finds love right before death” shtick in films, let alone, end up watching the film repeatedly.

The dying person here is Jung-won, the photo shop owner who is in his 30s and lives with his father and sister in the outskirts of Seoul. His disease is never revealed, and only his family knows that he has just a few months to live.

Jung-won calmly tries to make the best of his remaining days and readies himself for his inevitable passing. He goes on a trip with his childhood friends, taking care to take a last photo with them. He tries to teach his father how to use a VCR, writing down step-by-step instructions for him for when he will no longer be there to assist.

During all this, he develops a friendship with Da-rim, the young traffic officer, who develops feelings for him.

Throughout the course of the film’s narrative, nothing drastic happens. Jung-won cries only once in the film. Even then, he cries alone in his bedroom with a pillow over his face, hiding the sound so as not to worry his father.

And because all the details in the movie are so finely tuned to fit the characters, the audience is left realizing that Jung-won’s actions and behavior are exactly the kinds of things they would imagine someone like him doing.

The dialogue here is mere garnish. Revealing the identity of Jung-won’s disease seems frivolous. What needs to be said is said through tearless scenes of tragedy or a slight shift in how one holds an umbrella.

Without the armor of words or dramatics, Hur finds his own way of telling a story about mortality, about dealing with the inevitable, cherishing the moment as well as your memories and love.