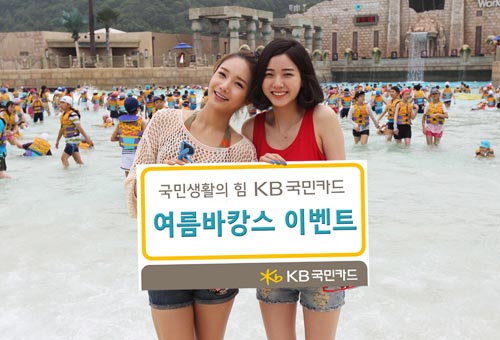 
With the summer vacation and water park season upon us, KB Kookmin card is holding various events that provide benefits to customers, such as discounts at major water parks and cash back when clients use their credit card abroad and when booking flight tickets.

In addition, there will also be discounts of up to 50 percent at Peak Island in Pyeongchang, up to 40 percent at Seorak Waterpia and Gyeongju Springdome, up to 30 percent at Spavalley (Daegu), Aquana (Hwasun, Jeju), Paraocean Waterpark (Yeosu), Aqua World (Danyang, Seorak, Sol Beach, Gyeongju, Byeonsan), Asan Spavis, Gyeongju California Beach, Tedin Waterpark (Cheonan), Jungheung Gold spa (Naju), Blue Canyon (Pyeongchang) and up to 25 percent discount at Woongjin Playdoci. At Sea La La, Four Season, Spa Green Land, Spa Plus, Paradise Spa Dogo and Resom Spa Castle, visitors can get a 20 percent discount (the discount during the peak season differs for each resort).

For the chosen clients who use their KB Kookmin card (KB Kookmin BC card included, KB Kookmin check card / KB Kookmin corporate card not included) overseas between July 1 to August 31, there will be a maximum 1,000,000 won cash back, depending on the amount clients spend.