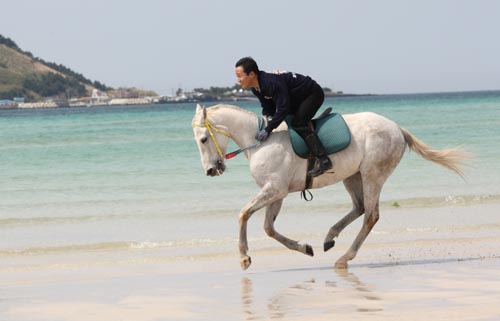 A scene from “Champ,” which will tell the real-life story of a jockey and his limping racehorse as they try to compete in a Grand Prix event. Provided by Showbox


A well-worn cliche says sports is drama without a script. And one of the reasons people love sports is because its improvisational theater exposes a full range of human emotions, from the exuberant joy of victory to the excruciating pain of defeat.

This year, local viewers will have the chance to experience that roller-coaster ride from the comfort of their seats. At least half a dozen sports films are in production and could be released in the next couple of months, according to distributors and production companies.

The films will cover a wide range of sports, from baseball, the nation’s most popular sport, to more obscure sports such as marathoning, boxing and table tennis. Some are based on true stories, while others rely on fictitious characters to deliver the drama.

Fictional or not, filmmakers say few subjects are as compelling as stories of athletes overcoming adversity.

“It’s not as though we were trying to do sports from the beginning,” said Cho Yun-mi, head of Lemon Tree, a Seoul-based film promotion company. One of the films it is promoting this year is “Fight,” a fictional tale about a former all-star pitcher who grows up only after getting demoted to the minor league.

“We were looking for some dramatic and touching characters, and we stumbled upon athletes,” Cho added. “The way they go through grueling practices and a series of failures before ultimately realizing success can be an apt metaphor for life.”

This year’s lineup will also include “Pacemaker,” about a marathon pacesetter who tries to complete his first marathon. It will be released late this year. “Champ,” which will be released in September around the Chuseok holiday, will tell the real-life story of a jockey and his limping racehorse as they try to compete in a Grand Prix.

Two films based on true stories stand out among the pack. “Korea” will center on the South Korea-North Korea women’s table tennis team that won the gold medal at the 1991 World Table Tennis Championships in Chiba City, Japan.

It was the first time the two Koreas had fielded a united team in any international sports competition. In the team final, the Korean athletes stunned China, which had won the previous eight titles in a row.

Ha Ji-won, a multiple award-winning star of blockbuster films, has been cast as Hyun Jung-hwa, the top South Korean player at the championships and an Olympic gold medalist. Bae Doo-na, another veteran, will play Li Bun-hui, the North Korean star and Hyun’s doubles partner in Chiba City.

Hyun, a former national team coach and now an executive with the Korea Table Tennis Association, has been teaching Ha and other members of the cast since the start of the year.

“The Perfect Game” is a baseball flick about two of the country’s greatest pitchers, culminating with their thrilling duel more than two decades ago.

On May 16, 1987, Sun Dong-yol of the Haitai Tigers and Choi Dong-won of the Lotte Giants met for the third and the final time in their illustrious careers in the Korea Baseball Organization. Each right-hander went the distance as their teams ended in a 2-2 tie after 15 innings in one of the most memorable games in the league’s 29-year history.

Director Park Hee-gon said the film’s stars, Cho Seung-woo as Choi and Yang Dong-geun as Sun, have been training with a former national team pitcher. Park said the actors have done a fine job as pitchers, but added that baseball is only part of the story.

“The film is about the fierce jealousy of the two men, who had accomplished pretty much all except for one thing,” Park said. “And it started with the question, ‘What if the other man had that one missing piece?’”

Park said he chose to focus more on the human element than on athletics. That way, he may be following in the footsteps of recent hit sports films.

“Take Off,” a 2009 film about Korean ski jumpers, is one of the highest-grossing local films of all time. Experts credit the film with helping the recent emergence of sports movies. Other hits include “Forever the Moment” (2008), a true story about the South Korean women’s handball team at the 2004 Athens Olympics, and “Mr. Gam’s Victory” (2004), a true-life tale about a mop-up bullpen pitcher, Gam Sa-yong, thrown into a starting role against the KBO’s best team in 1982.

Sometimes, financial issues can force filmmakers to opt for the drama over the action. They say it’s virtually impossible to project the thrills of real-life competitions onto the big screen.

Choi Min-soo of CJ E&M, the distributor for “Korea,” said there’s only so much high-tech equipment can do.

“If you want to shoot sports scenes and make them realistic, it will cost more than twice as much as shooting a normal film,” he said. “This is why sports films can be risky.”

Risky or not, filmmakers have tried to jump on the bandwagon. With three all-sports cable stations and three golf channels providing blanket coverage, and a record number of fans going to stadiums across the country, the time has hardly been riper for sports movies.