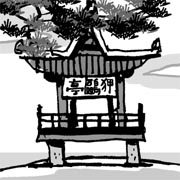 Long ago, if you looked to the north from southern Seoul, you could enjoy the picturesque view of Jeoja Island, which has since disappeared. The peaks of Mount Bukhan were also in sight behind the island, so receptions for Chinese ministers were held there during the Joseon Dynasty (1392-1910). Until Korea’s liberation after the Japanese occupation, it was just one of the many farming villages along the Han River. As refugees settled here after the Korean War, commerce and trade began to develop. Han Myeong-hoi, a Joseon-era strategist, built a pavilion here and named it Apgujeong after his pen name. And that’s how the area acquired its name. Apgujeong later became incorporated into the city of Seoul in 1963. Until then, it had belonged to Gyeonggi Province.

In the early 1970s, affordable national housing complexes were constructed in Banpo and Jamsil to meet the housing needs of average Koreans. Luxury apartments were built in Apgujeong-dong, targeting the middle and upper classes. Hyundai Engineering and Construction had purchased the lot by the river to store equipment imported from overseas to be used for the construction of the Seoul-Busan Expressway. When the third Han River Bridge, now called Hannam Bridge, was built, the riverside town became a sought-after location.

The Apgujeong Hyundai Apartment complex signaled the start of the Gangnam era. The construction of apartments began in 1975. Having gained confidence from a successful project in Seobinggo-dong two years before, Hyundai began to pursue housing construction aggressively. Until the early 1980s, 24 apartment complexes with 10,335 units were built there. If you search the Internet, the area now contains 578 plastic surgery clinics, 395 wedding studios, 391 wedding shops and 43 drama schools.

Apgujeong-dong was a free zone of capitalism that emerged as the oppressive military regime lost its firm grip on the nation. It was where ambition and desires were expressed freely, and the public raved at the unrestrained freedom.

This symbolic area will soon be the site of the nation’s largest redevelopment project. Last week, Seoul announced a plan to build 45- to 50-story high rises there. There are many more steps left before the project is finalized, and construction is expected to commence in three to four years. We need to watch closely to see if the redevelopment project will bring about a renaissance for Apgujeong.