Village a first for Worlds

Village a first for Worlds 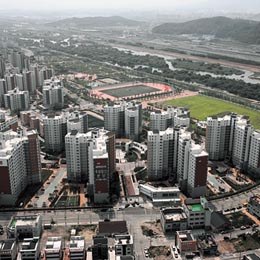 For the first time in IAAF World Championships history, an athletes’ village has been built to accommodate participants and staff.

The village for the Daegu Worlds is located in Yulha-dong, alongside the Geumho River, and is only seven minutes away from Daegu Stadium by bus. The village will have three zones: a welcome center, the Champions Plaza and Sarbi Center.

Comprised of nine apartment buildings, the village has 2,032 rooms for about 3,500 visitors. There is also space to accommodate about 680 journalists.

A training site near the village will allow athletes to exercise and train during their stay. The site has an eight-lane 400 meter track and has facilities for athletes practicing for jumping and throwing events. There is also a race walking loop for competitors in that event.

The village has 122 convenient facilities, including banks, churches, medical clinics, barber shops, gyms and a post office and shopping center. And with a pond, fountain and pavilion, the goal, the organizing committee says, is to make things as comfortable as possible for the visitors.

The organizers said that after the World Championships, the buildings will be sold to Daegu residents. According to the organizers, the welcome center will be converted into a commercial district after the event, while Champions Plaza is going to be a regular apartment building. Sarbi Center will be turned into an elementary school.

The athletes’ village will be opened to the public next Friday and its opening ceremony will be held on Aug. 20, a week before the Worlds start.