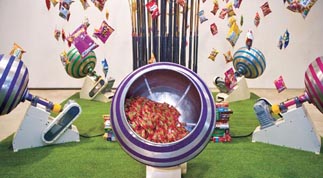 The weather outside doesn’t allow for much movement, but museums around the city are buzzing with activity in an ode to summer vacation season. Several of the city’s major museums have been taken over by barrels of sweets, cheeky cartoon characters and streams of bubbles to entice kids on holiday from school.

On a recent day earlier this month, the Seoul Art Center’s Hangaram Art Museum was bustling with viewers who were bobbing around the “Kinetic Art” exhibition, part of the “Art and Playing” series, an annual exhibition now in its ninth year.

The exhibition, featuring 14 artists, shows what happens when contemporary art meets movement. The kinetic artworks gathered there range from mechanical structures that move on their own to interactive ones that require viewers to initiate movement.

One child near the entrance stood frozen, licking his lips in front of a massive exhibit, Kim Dong-won’s “La Fontaine,” that spun and turned. Dangling from above, were various bags of chips. Piled below were his favorite boxed snacks. Elsewhere, sweets rolled endlessly inside steel barrels that made popping noises. The boy reached for the candy, but then decided to mind the line that said “please do not touch.”

Not far away, two other children were busy dragging their parents to a curiously wiggling oval-shaped tunnel. Inside, there were little people rowing boats, and the older sister began to imitate the motion as her little sister broke into giggles.

Next to that group, a little boy, perhaps five years of age, pushed a few red buttons to make a marionette move. Nothing happened - or so he thought, until his mother showed him how to work the device. 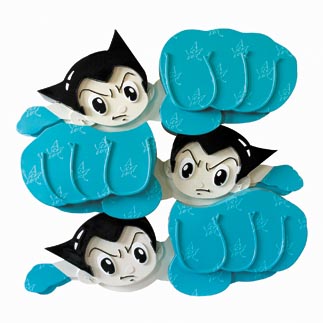 Baek Jong-gi’s “Three Astro Boys in Luxury Gloves is part of the “Cartoon Meets Art” exhibition at the Nam Seoul Annex of the Seoul Museum of Art in central Seoul.

Another girl near him stood bewildered in front of Vitruvian Man sculptures, the work of Ahn Soo-jin, that just wouldn’t move. It turned out that the sculptures rotate at the same speed as the earth, which was much too slow for the little girl, who attempted to spin the figure herself until told to step back by a museum docent.

With two exhibition halls full of creative, kinetic structures, there is plenty to keep kids entertained. There is a bubble-making corner and a sound-making corner. In one area, children were busy imitating the poses of human figures made of thin steel sheets as their mothers snapped pictures.

Other major art museums around the city have also launched exhibitions for kids, including “Cartoon Meets Art,” put together by the Seoul Museum of Art, and “Earthworm, Save the Earth!” organized by the Lotte Gallery.

In “Cartoon Meets Art” cartoon characters from Disney films, Japanese animation, Korean Webtoons (web-based, scroll down cartoons popular in Korea), and characters created by the artists are integrated with the more traditional platforms of art.

Through its annual summer exhibit, the Seoul Museum of Art tries to make modern art “lighter” and more accessible to the public, the museum said in a statement. The 54 works by 11 artists do not stop at cartoon characters, but go further to speak of cultural change and adaptation.

Stepping through the front gates of the museum on a recent afternoon earlier this month, small children could be seen running around the sculpture garden at the front of the building, playfully shooting water guns and celebrating the good weather after days of rain.

Inside, the well air-conditioned exhibition halls greet visitors of various ages. A little child of six or seven stood mesmerized by a moving cartoon clip, listening attentively to the audio guide.

Choi Sun-hee, the mother of a seven-year-old girl, said the exhibit was perfect for her daughter.

“Usually, museums bore my child, but the artworks here are so familiar and colorful that they keep her entertained,” she said.

“She recognizes characters like Mickey Mouse, but I don’t think she gets the satire,” Choi added with a smile. 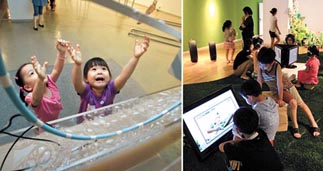 Left: Children jump at Jeong Chan-ho’s “Catch Me If You Can,” which is also part of the exhibition. / Right: Children hang out at the media art station, which is part of the “Earthworm, Save the Earth!” exhibition at Cheongnyangni Lotte department stare in northern Seoul. Provided by the museums

The child was posing in front of a Mickey Mouse bust for a picture snapped by her father. She then turned her attention to a sculpture of Hello Kitty hunting Mickey Mouse.

The artworks also attracted elder visitors. Moving slowly in groups of two or three, older men and women from the neighborhood seemed pleasantly entertained by the cartoon-themed artwork.

“I think it’s great that talented, young artists are given an opportunity to make themselves known through exhibitions such as this,” said a man surnamed Yoo, 68, who agreed to a short interview in the museum’s sculpture garden. “As a Seoul citizen, I am happy that quality exhibitions such as this are available to the public for free.”

Meanwhile, “Earthworm, Save the Earth!” is an exhibition for environmentally conscious families. Located within two Lotte Department Store branches, one in Yeongdeungpo and the other in Cheongnyangni, the exhibitions offer families shelter from the heat and interesting art.

Featuring environment-themed works by media artists from Korea and abroad, the exhibit is designed to delight children with displays featuring animation, projected presentations, computer and Play Station 3 games, and installation art made from recyclable objects.

Groups of children bounced from one station to another, taking turns playing the games and activities. One child reluctantly passed on the remote control - but only after his father, in a low voice, called his full name for a second time.

Half of the children’s parents were standing around, keeping an eye on the media stations, while the other half seemed to be off shopping at the department store. 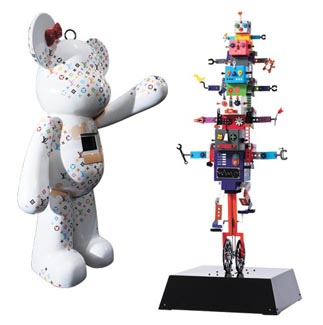 The exhibition, which is subtitled “Green Hands-on Education with the Earthworm,” provides curious visitors with plenty of opportunities to manipulate the exhibits. One station shows an animated earth polluted with factories and smog. When the visitor blows into a pinwheel, the grey marks of industry are replaced with forests of trees.

Another station projects a beautiful bird onto the wall. When a visitor reaches out to touch the bird and her projected shadow approaches it, the bird flies away.

“This piece tries to show how nature is the most beautiful in its untouched state, and that humans should let nature be,” a gallery staff member said.

The organizer of the exhibition, Lotte Gallery, described the objective of the event as an opportunity for children to recognize and understand the gravity of the earth’s environmental problems and instill in them the proper mindset towards preserving the earth’s resources.

“Earthworm, Save the World!” is being held simultaneously in two places: on the 8th floor of Cheongnyangni Lotte department store (Cheongnyangni Station, line No. 1), and on the 10th floor of Yeongdeungpo Lotte department store (Yeongdeungpo Station, line No. 1). Admission is free. Hours are from 10:30 a.m. to 8 p.m. The exhibits run until Aug. 18 in both locations.