Japanese animator Makoto Shinkai, top, has been dubbed the next Hayao Miyazaki, the acclaimed Japanese animator. Shinkai was recently in Korea for a preview of his new film, “Children Who Chase Lost Voices from Deep Below,” above left, which is similar in plot to his most recent film, “5 Centimeters per Second,” above right. Main caption by the JoongAng Ilbo, stills provided by the Seoul International Cartoon & Animation Festival


Makoto Shinkai, a 38-year-old Japanese animator, has been identified by many in the industry as the future of Japanese animation. His works, such as “The Place Promised In Our Early Days” (2004) and “5 Centimeters per Second” (2007) have even drawn comparisons to those of famed Japanese animator Hayao Miyazaki, who has produced hundreds of animated films including the award-winning “Spirited Away” (2001) which won the Golden Bear at the 2002 Berlin International Film Festival.

Despite the fuss over Skinkai, the young animator, whose films deal with philosophical themes such as separation and the feeling of loss, says he simply hopes to carry on the legacy of Japanese hand-drawn animated films by his legendary predecessors including Miyazaki and Hideaki Anno.

His newest film, “Children Who Chase Lost Voices from Deep Below,” was the opening film at the 15th Seoul International Cartoon & Animation Festival in mid-July and is set for wide theatrical release in Korea later this month.

The film has been described as a turning point in Shinkai’s career. Before now, the versatile director had produced all of his animated feature films by himself. In addition to directing, he wrote the screenplays, did the editing and even voiced the lead characters. 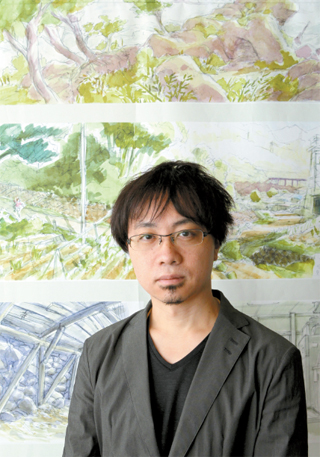 With the new film, however, Shinkai hired 15 staff members, some whom used to work for Studio Ghibli, one of the biggest animation studios in Japan. His cinematographer is Korean camerawoman Lee Ju-mi, who has worked in the Japanese animation industry for the past eight years.

Shikai told the Korean media that he decided to change his approach to filmmaking in order to give himself greater flexibility during the creation process as well as broaden his audience.

The film follows the journey of a young girl named Asuna who is on her way to Agaruta, a distant underworld, in hopes of finding her friend Shun, who dies early in the film. Along the way, Asuna meets a former teacher of hers who is desperate to reunite with his wife who passed away years ago.

The Korea JoongAng Daily was invited to a screening and discussion of the film with the director, Korean fans and the media. The following are excerpts from the post-screening question and answer session with Shinkai.

Q. Please tell us about your new film.

A. Since there are many messages in the film, it is a bit complicated but the plot is fairly simple to understand. The characters in the film leave home, head to a distant place and then return to the place where they used to be. Its similar to the stories in myths and ancient stories. “Spirited Away” is also based on the same plot. Journeys often help people appreciate their home and normal life. Asuna needed a journey of her own to understand life and death.

You’ve mentioned in previous interviews that your next project would be very different from your previous work, “5 Centimeters per Second.” What are the similarities and differences between the two films?

Some things changed and some things remain the same. The story line of this film is the same as the previous one. It is based on the feeling of loss.

Your films often deal with separation or the feeling of loss. Why is that? Does it have something to do with your personal history?

That’s a question that I often receive. In “5 Centimeters per Second,” there is a man who is turned down by his first love. Like him, I also failed to win the heart of my first love. Maybe that’s because I’m not a popular guy. (Laughs.)

But if you’re sad, you have to look inside and think about how to cope with the feeling. But I’m always open to any theme.

These days, the world’s animation industry is dominated by 3-D films but you have continued to draw your films by hand. What are your thoughts about the 3-D craze and the decline of 2-D animation?

Two-dimensional animation is a time-consuming process and takes much more work than 3-D animation. For this reason, 2-D animation could become more of a minority in the near future. But 2-D animation has its strong points. Animated films drawn by hand give audiences the feeling of being a child again.

One of the great pleasures of your film was its scenery. What inspired you to create the rustic but beautiful scenery for the small town in the film?

The fictional small town is based on my hometown of Nagano. I believe some environments begin to heal when humans and nature interact for a long period of time. Since the animation is 100 percent handmade, I try to include meaning and intention when drawing the scenery.

The Korean animation industry has been stagnant for many years, largely due to rampant illegal downloads along with harsh working conditions such as frequent overwork and low payment. What is it like in Japan?

The same is true for the Japanese animation industry. Many animators and others in the business are moving to the gaming industry, which is more profitable. Before I moved to an animation company I worked at a gaming company and before I made the decision to move, I had to think about the difference in the two salaries. Ultimately I decided to make the switch because drawing animation allowed me to create my own world.

Why do you think Japanese animation has had such a huge influence on animation in many other countries?

Like many Japanese people, I grew up reading manga and watching animation and I still do today. In Japan, people don’t have this idea that animation is just for children. Children and adults alike read manga and watch animated films or television programs. The market is pretty big. Hundreds and thousands of new comics are published each week through various manga magazines, some of which are made into animated films or television programs.

These children, like me, are all grown up now and have started to create manga and animation with different styles and new themes.

You’ve become a role model for aspiring young animators. Do you have any tips for those who want to become animators like yourself?

The most important thing for animators is technique. Without technique, you can’t produce animation. But audiences tend to prioritize story over technique. For this reason, you need to know how to use your technique to deliver a story effectively. Striking a balance between the story and the technical aspects of the animation is very important.

What can we expect from your next project?

Just two and half months have passed since “Children Who Chase Lost Voices from Deep Below” was released in Japan, so I haven’t had any time to think about my next project.

One thing I can tell you for sure is the March earthquake in Japan changed the way I think about daily life. I used to try to capture everyday moments and their special meanings in my works but I’ve realized that things change every day for many reasons. Because of the earthquake, many Japanese people had to leave their homes. That is incredibly sad and tragic, but I want to find something positive in the sadness. So I’m thinking about doing something about leaving home but from a positive point of view. How to weave that into the story is my job as an animator.