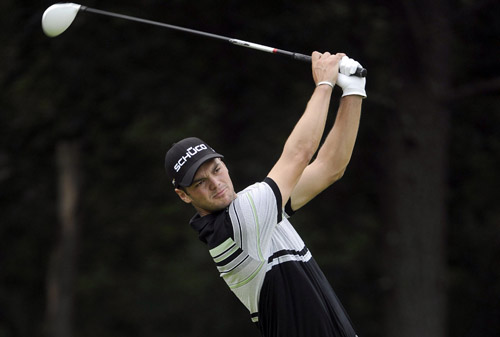 Martin Kaymer warms up for the PGA Championship in Jones Creek, Georgia on Monday. [REUTERS/YONHAP]

ATLANTA, Georgia - Defending champion Martin Kaymer of Germany tees off tomorrow at the 93rd PGA Championship trying to match Tiger Woods as the only back-to-back champion in the event since 1937.

Kaymer claimed last year’s title on a British Open-style course in Whistling Straits, but faces the challenge of repeating on the long layout, dense rough and sweltering heat of Atlanta Athletic Club.

“It’s a big week for me to defend my first major,” Kaymer said. “It will be interesting. It’s a very difficult course, very long and very tight.”

No one else has done it since Denny Shute in 1937 when the event used a match-play format.

“I think that there won’t be a lot of low scores,” said Kaymer, who predicted a winner in “single digits” below par on a course lengthened and revamped since David Toms won the 2001 PGA title here with a 15-under par 265.

Kaymer likes how he is playing at the moment, but is uncertain about pulling off another major triumph in a world-class field.

Kaymer said last year’s title has changed his life, making him a celebrity in his homeland. German football players are now calling him to ask golf advice.

“I’m trying to tell the people in Germany that it teaches you a lot of values in life,” he said.

Kaymer has a role model to look at when it comes to his sporting breakthrough and German culture - retired tennis star Boris Becker.

“A lot of people ask me if I feel the pressure of being the golf star there, like Boris Becker was in tennis a few years ago, and I’m OK with that,” Kaymer said.

One thing golf has given Kaymer is a confidence he never knew he lacked.

“The confidence that you gain from winning a major, I never had that before, even when I played well,” he said. “That gives you so much confidence and so much satisfaction ... You sacrifice a lot of things. That is the payback.” AFP