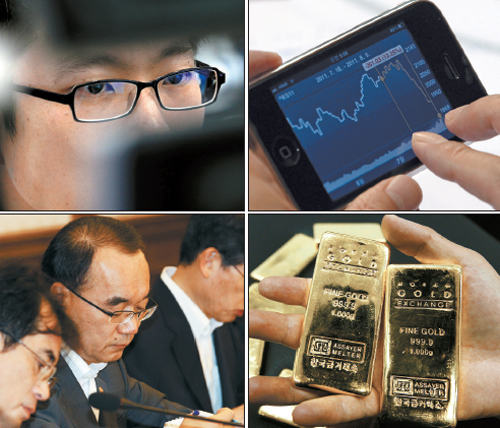 Korean stocks suffered another heart-stopping rout yesterday, at one point falling a shade under 10 percent in midday trading.

Domestic and international efforts failed to reassure panic-stricken investors, whose indiscriminate selling pushed the Kospi below the psychologically important 1,700 barrier at one point. It is the first time in three years that trading was halted for five minutes for the second straight day.

It’s the first time since before 1980 that the market dropped 2 percent for six consecutive trading days.

When fears of a double-dip recession were the impetus of last week’s selling, Friday evening’s decision by S&P to downgrade the U.S. credit rating infused fear into the already shaky market.

However, analysts said that investor panic is overruling any logical response to current economic fundamentals.

Authorities the world over have started to act. Government agencies and CEOs of local brokerages have begun releasing some measures to soothe the panic. Also, investors are looking to the U.S. Federal Open Market Committee (FOMC) meeting on Aug. 9 U.S. time for a reprieve.

It was a harrowing day for Korean markets.

This comes on the heels of pronounced drops in European and U.S. stock markets on Monday. The Euro Stoxx 50 Index of euro zone blue-chip stocks fell to a two-year low, swallowing early rallies on news that the ECB would buy Italian and Spanish bonds. The S&P 500 retreated 6.66 percent to 1,119.46, while the Dow Jones Industrial Average shed 634.76 points, or 5.55 percent, to 10,809.85 on Monday.

The Kospi gets a drubbing

Since the stock rout began last Tuesday, local analysts have been at a loss to explain what has been behind the selling.

“Korean companies’ performance and credit quality are not problematic. I believe chances of a further steep decline in the benchmark index are limited,” Kim Hee-seok,the investment strategy division head of the nation’s biggest investor, the National Pension Service (NPS), said yesterday according to Bloomberg.

However, the Kospi has been volatile time and again, plunging a total of 370.96 points since the market closed on Aug. 1 and shedding some 208.99 trillion won ($192 billion) in market capitalization in six days.

But analysts said that even taking such factors into account, the Kospi’s plunge is unprecedentedly steep - driven by investor panic rather than sound analysis of economic data.

“It’s the first time since 1980 that more than an average of 2 percent drop every day for five trading days, let alone six,” said Eric Kim, an economist at Woori Investment & Securities.

This is beyond the pale of Korean economic fundamentals or even current negative U.S. economic indexes, and is largely due to investors being psychologically spooked, experts explained.

“A sort of psychological tipping point has been crossed,” said Kim. “The problem is how do you dispel investor panic when both worries about global economic recession and doubts about the stability of the financial system are increasing?”

On this point, government officials agree.

“Korean markets have a tendency to be hypersensitive [to global stimulus],” Hong Young-man, standing commissioner of the Securities and Futures Commission of the FSC, explained.

“Foreign investors hold a large share of a market that is very liquid, so a pattern of foreign sell-offs followed by Korean retail investors dumping shares emerges. In order to dampen such over-the-top market reaction, reassuring investors will be paramount.”

In fact, foreign investors sold off 1.17 trillion won in Kospi shares yesterday, driving the index down.

Because foreigners hold more than 30 percent of market capitalization, such a selling streak also means a drop in the value of the won as foreign investors sell stocks to move into safe haven currencies such as the dollar, the yen and the Swiss franc.

The won reached 1088.10 against the dollar yesterday, down compared to the day before, despite Korean government intervention in foreign exchange markets.

Countermeasures on the way

In particular, government officials and the capital market industry discussed measures such as giving tax breaks to mutual funds and setting up a “market stability fund” fed into by the KRX and other institutions to invest in local stocks and bonds.

The FSC further decided to temporarily ban short selling as well as ease the upper limits on a single investors’ stock purchase volume for both the Kospi and Kosdaq markets for the next three months starting from today, while stepping up monitoring of online trading as well as asking financial companies to ease their internal stop-loss rules.

Short selling, the practice of selling stocks that an investor does not own, was barred during the 2008 global financial crisis, then reinstituted for nonfinancial stocks in June 2009 as the market returned to normal.

Stop-loss, which is an internal mechanism to sell a stock when it reaches a certain price to cut losses within larger investors such as banks or insurers, has been credited with driving the accelerated market drops, as many larger investors are forced to automatically sell large quantities of stocks upon reaching preset stop-loss limits that can be as much as a 10 percent drop in share value from market open.

Meanwhile, pension fund managers such as the NPS and the Korea Teachers Pension plan to substantially expand their domestic stock investments to buoy falling stock markets. In particular, the NPS, the fourth-largest pension manager in the world, decided to sink 18 percent of its 341 trillion won in investment funds by the end of this year, an increase from 17.77 percent as of the end of June.

Although forecasts are bleak on what could turn investors’ psychological panic around if cooperation by the Group of 7 and Group of 20 fail to do the trick, experts will look to the U.S. Federal Open Market Committee meeting on Aug. 9 (U.S. time) as a possible remedy.

Korean government officials have harkened back to previous market crises in an attempt to lift investor spirits.

“We saw a similar situation with the local markets back in 2008, but persevered and bounced back,” said Hong, the FSC standing commissioner.