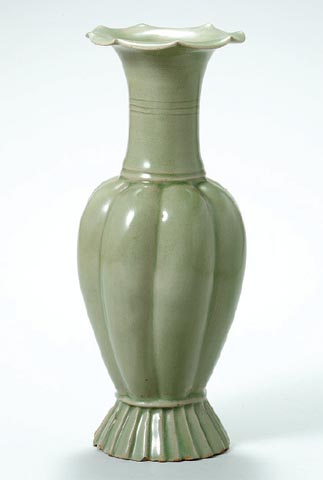 The elegance of Korean porcelain is highlighted in its maebyeong, or plum vases, which were often used to store wine. Maebyeong refers to a specific form of Goryeo celadon, or jade-green glaze, that features a small cup-like rim at the mouth of its characteristically curvaceous body. Here we see soft lotus veins delicately incised on the body, designed in such a way that their flowing movement works in harmony with the shape of the vase. The intaglio engraving technique was made using a steel-cutting tool called a burin, or cold chisel. Early maebyeong mostly featured plant designs, but animals, natural imagery and mythical beasts later became popular.