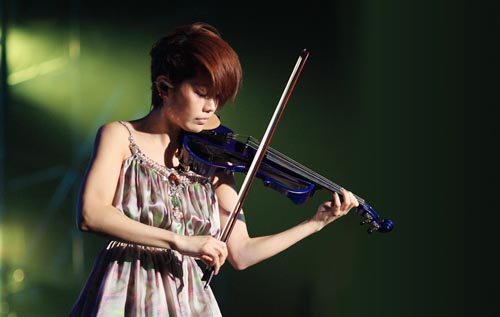 Sue Son performs as a guest artist during a concert by Yoon Do-hyeon at Olympic Hall at Olympic Park in eastern Seoul on July 23. Provided by Daeum Entertainment

The 26-year-old violinist recalls her sudden rise to stardom back in 2009, when she auditioned for the third season of the British reality show “Britain’s Got Talent,” as being one of the most confusing and exhilarating times of her life.

Son initially auditioned for the show as part of a classical music duo called Addicted, formed with her best friend at the time, Janine Khalil. With Son on electric violin and Khalil on keyboard, they played an original number for the three judges: Simon Cowell, Amanda Holden and Piers Morgan.

In less than 30 seconds, the girls were voted off by the judges, but in a surprise twist, Cowell called Son back and asked if she would consider auditioning as a soloist.

“I thought: ‘We just got eliminated - how could things go any worse?’” Son said during an interview with the Korea JoongAng Daily last week.

As the crowd cheered her on, Son, who looked visibly shaken by the turn of events, eventually said “Yes, I will” with determination and won over all three judges with her powerful rendition of Vanessa Mae’s “Storm.”

Now, after three years, and a friendship unraveled in the U.K., Son is back in Korea to begin her career as a semiclassical violinist.

Her debut single, “I Wish,” topped the country’s crossover charts as soon as it was released late last month. She is a regular guest on cable channel Mnet’s music show “Must,” hosted by rock musician Yoon Do-hyeon, and has been featured on other television and radio variety shows.

Adjusting to new surroundings seems to be a persistent part of Son’s life. Born in Seoul, Son started playing the violin when she was 6-years -old.

During her third year in elementary school, her family moved to England and she went on to study music at the Royal College of Music and the Guildhall School of Music & Drama.

“I went to London and I didn’t know English,” she recalled. “And then I went to school and everyone was blonde with blue eyes and I felt like an ugly duckling.

“It was through violin that I got to mingle with people and started making friends. Violin was a lifesaver,” she said.

As Son embarks on a new, professional beginning in Korea, the Korea JoongAng Daily caught up with the artist to talk about her rise to fame as a reality TV star, losing a best friend, launching a career in music and moving on.


Q. What has it been like for you to be back in Korea as you launch a new solo career here? 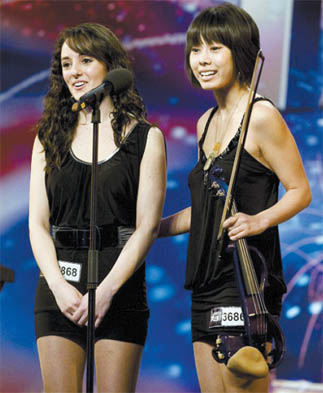 Janine Khalil and Sue Son appear in this still from the British reality show “Britain’s Got Talent” in 2009. Provided by Sue Son

A. I lived in England for such a long time - I lived there for 13, 14 years. I had a good education there, but I always knew that I was Korean. I wanted to show the Korean people that I love my music and that I’m Korean, but I never got a chance because I was staying in the U.K.

But through “Britain’s Got Talent,” I felt I had done something. I could go back home and show people that I had gotten some recognition.

When did you first pick up the violin? What drew you to play?

Since I was young, I’ve liked winning things ­- to achieve things. I started playing violin when I was six. I remember watching the BBC one day when I was 11 or 12 and watching Vanessa Mae performing in Albert Hall, and I thought, wow, I should do something like that.

When I was really young, I loved listening to classical music. As I got older, I started to get into pop music, like Take That and Boyzone. I’ve always thought I wanted to do something that mixes classical and pop.

You were a classically trained violinist, yet your professional career took off with your playing electric violin. What kind of allure does the electric violin hold for you compared to classical violin?

I actually bought an electric violin six days before the show thinking that I couldn’t really play a regular violin on “Britain’s Got Talent” because you can’t move around on the stage or do anything. I didn’t even know what electric violins sounded like, but I bought it and I wanted to challenge myself to see if I could actually do it and be a performer in that field.

Your journey on “Britain’s Got Talent” was dramatic to say the least. What pushed you to audition for the show in the first place?

Janine and I saw Escala [an electronic string quartet that was one of the finalists on season two of “Britain’s Got Talent” ] on the show and said, ah, we should do something like that. When we got voted off, we were completely shocked because we had that classical music pride. We thought we’d definitely make it to the next round. I tried to be positive but I couldn’t be.

Then the judges called you back.

That was so shocking, as well. I thought they were going to swear at me or something. I thought, we just got eliminated - how could things go any worse? So, I went out and he [Cowell] said, “I think you are talented,” and I was like, “Whoa ... this is starting to kick off well.” So I stayed on the stage for a bit and I got a second chance.

I think it was very shocking for the girl. She kind of understood my decision at first, but the tabloids made the situation worse. They wrote really nasty stuff and said that we were enemies.

Do you resent her for not supporting you?

As a friend, she should have kind of leaned on me, but instead, she left me. She said to one of our mutual friends that she wanted to just forget her past.

The judges said she was a bad musician, but that’s not true. It’s just that we didn’t go well together as a duo. It’s an entertainment show so they wanted to make it so drastic, like “she is bad and she is good.”

I think the bottom line was that it was really embarrassing for a classically trained person to get eliminated from the show. I think that was it. But we are adults. We make our own decisions, and I did not push her to do audition. We both decided to do it.

In retrospect, do you ever regret making the decision to audition as a soloist?

No. If an opportunity is thrown at you, you have to take it because you never know when it’s going to happen next. Obviously, I cried a lot because she was a good friend and I lost her, but time goes by and I have to do my own thing.

From that experience from “Britain’s Got Talent,” I learned that I could actually perform as a performer, doing what I dreamt of. So the show made my dream come true in a way because I was never quite sure before.

How do you think you did on the semifinals of the show?

During my semifinal stage, I felt as though the producers made me into a sort of character, similar to the year before with Escala. It was exactly the same as that - [Escala] had fire and minidresses, etc. I had fire, a minidress, extensions and smoky makeup, which didn’t really suit me. I hate extensions because it’s really difficult to perform with long hair, but I had to do what they told me to do, and they made me into that character. Then, during judging, Simon [Cowell] said I had no character and I was like, “you put me in these shoes, you can’t really say that.”

You’ve now had experience in showbiz in both the U.K. and Korea. What do you feel are the differences between the two countries regarding the mechanism of the entertainment industry?

I think the entertainment industry in Korea is more glam, decorative and fancier. England is more conservative. In England, there aren’t that many programs that artists can go on and show themselves, but in Korea, you can do so many different things, and there are so many entertainment shows. Also, Korean fans are wilder. In England, people don’t queue up to get glimpses of celebs.

What kind of musician do you want to become? What are your career goals?

I love all sorts of different musical genres including hip-hop and I’d love to collaborate with other artists someday, like Tiger JK. You have to try different things when you’re young, right? I think if you are persistent and love what you are doing, even if it takes a long time, opportunity does come your way. If you are ready, you can take that route.

* Semifinalist on the third season of “Britain’s Got Talent”