‘Zoolander’ star Stiller to get Chaplin award from BAFTA

‘Zoolander’ star Stiller to get Chaplin award from BAFTA 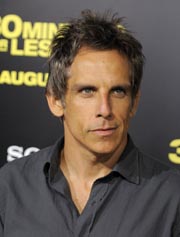 LOS ANGELES - Ben Stiller is being honored for his comedic contributions by the British Academy of Film and Television Arts. The group’s Los Angeles branch says Stiller will receive the Charlie Chaplin Britannia Award for Excellence in Comedy.

Veteran producer Nigel Lythgoe called Stiller “a master of comedy who, just like the legendary filmmaker for whom this award is named, embodies the remarkable multihyphenate talents of actor, writer, director and producer.’’ Lythgoe serves as chairman of BAFTA Los Angeles.

Stiller will receive the honor at the Brittania Awards on Nov. 30, when actress Helena Bonham Carter and animator John Lasseter are also being recognized.

The 45-year-old Stiller will next be seen opposite Eddie Murphy in “Tower Heist.’’