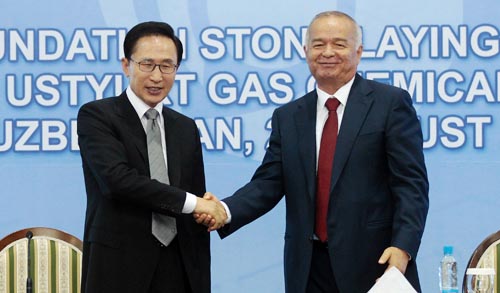 
TASHKENT - Korea signed a $4.1 billion package of deals Tuesday to develop a massive gas field and build a related plant in Uzbekistan after President Lee Myung-bak held summit talks with his Uzbek counterpart.

The project to develop the Surgil gas field near the Aral Sea and build a gas and chemicals plant is the largest-ever contract between Korea and Uzbekistan since they established diplomatic relations in 1992, officials said.

During their talks, Lee and Uzbek President Islam Karimov pledged to work together closely on the project, understanding that its success would have positive effects on further cooperation between the two countries, officials said.

Lee arrived in Tashkent earlier in the day for a two-day visit as part of a three-nation tour of Central Asia focused in large part on boosting economic relations with the resource-rich nations. He earlier visited Mongolia and plans to head to Kazakhstan on Wednesday.

The Surgil gas field is believed to be holding an estimated 130 billion cubic meters of natural gas (960 billion tons of LNG, or 830 million barrels of oil equivalent). The project calls for developing the field and building a processing plant and is expected to cost $4.16 billion in total.

Korea and Uzbekistan have pursued the Surgil project since Korea Gas Corp. (KOGAS) and UNC signed a memorandum of understanding in 2006. The two sides have since established UZKOR in 2008, in which a Korean consortium led by KOGAS holds a 50 percent stake.

Lee and Karimov attended the signing ceremony after their summit. Also signed at the ceremony were a memorandum of understanding committing the two countries to close cooperation in the mineral resources and industry sectors as well as a pact to simplify the visa process for Korean business professionals.

Karimov said that the Surgil project is one of the largest projects “not only in Uzbekistan, but also in all Central Asia and the CIS [Commonwealth of Independent States] regions” and that such a project would help harden Uzbekistan’s “economic and political foundations.”

Karimov told a joint news conference that Uzbekistan is willing to expand exports to Korea of strategic resources, such as rare earth minerals and uranium, and that it plans to import high-tech facilities from Korea to modernize its industries.

Lee told the conference that Korea is committed to mutually beneficial cooperation with Uzbekistan and intends to play an active role in developing and diversifying Uzbek industries.

Korea and Uzbekistan also made about 20 other agreements in health care, medicine, IT, textiles and other industries, officials said.

Lee’s two-day visit to Tashkent is also expected to strengthen his personal bond with Karimov, officials said. The two leaders have met every year since 2008, discussing cooperation between the two countries and building a personal friendship, they said.

At the summit, they expressed satisfaction with the status of relations and cooperation between the two countries and agreed to work together to further expand them. They also agreed to boost people-to-people exchanges to mark next year’s 20th anniversary of diplomatic relations.

Lee praised Karimov’s role in helping to stabilize Central Asia and Afghanistan, and asked for Uzbekistan’s continued support for Korea in the international arena.