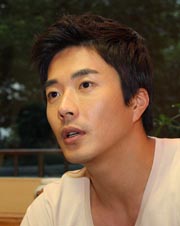 Actor Kwon Sang-woo is headed to Hollywood, according to his agency, Bel Actors Entertainment.

The agency said yesterday that Kwon was cast as the lead in an action film to be produced and distributed by a major production company. Shooting is to begin early next year in Malaysia, the agency said.

The film adds to the actor’s already hectic schedule.

The pan-Asian actor is currently busy promoting his new film “Pain,” which will be released early next month in Korea. After that, he heads to China to shoot the Chinese film “12 Chinese Zodiac Heads” with Jackie Chan.

Kwon also has a role in the Chinese film to be released between October and November in China. In “Repeat I Love You,” Kwon is paired with Chinese actress Cecilia Cheung.

Kwon made his debut in 2001 with romantic roles in television dramas and garnered rave reviews for his role as a troubled teenager who adores Bruce Lee in the hit 2004 film “Once Upon a Time in High School.”