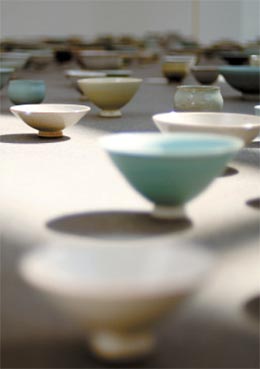 When Lee Young-jae, 60, left Korea to broaden her knowledge of pottery and ceramics in Germany in 1972 she could not have anticipated that her works would win such broad acclaim three decades later.

Inspired by the aesthetic values of the Bauhaus - a marriage of artistry and utility - and Korea’s silhak (practical learning) philosophy, Lee’s works have won widespread praise as artistic masterpieces.

Her ceramic vessels have been in use as chalices at St. Peter Cathedral in Cologne since 2000. Six years later, she became the first potter to exhibit her ceramics in Germany’s famous Pinakothek der Moderne in Munich in 2006, and she returned for another exhibition in 2008.

In addition, she has maintained a pottery workshop in Essen, Germany called Keramische Werkstatt Margaretenhohe since 1987 that has become renowned for its fine tableware series.

Despite the accolades, however, she remains modest and says she would characterize herself as an artisan rather than an artist.

Last month, she sat down with the JoongAng Ilbo in Korea, where she is preparing for an upcoming solo exhibition in Busan that is scheduled to open in November. She talked about her identity as an artist, her artistic philosophy and the importance of utility in design.


Q. What makes your pottery special? 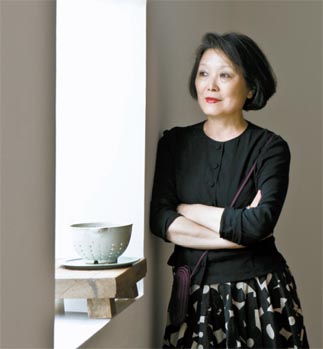 Lee Young-jae is the first potter to exhibit at the Pinakothek der Moderne Museum in Munich in 2006. She was also asked to create ceramic vessels for the St. Peter Cathedral in Cologne. By Kwon Hyeok-jae

A. The ceramic bowls and porcelains I make are functional. The strength and beauty of Korean pottery is, after all, its utility. In contrast to Japanese and Chinese pottery, which was made for ornamental purposes only, Korean pottery was always intended for actual use. And I think that by adhering to the roots of Korean pottery, my ceramics have become even more special in Europe.

Are the art pieces in a gallery aiming for a specific artistic genre? One can also ask whether an artwork is a product or a masterpiece. But one thing that I’m certain of is that I am an artisan, a potter rather than an artist. I make tableware and household items that people can use in everyday life. These pieces are special because they are made for people. And as I said before, I think that the utility of my works makes them masterpieces.

Your ceramic vessels have been used for mass at St. Peter cathedral. How did you come across this opportunity?

In 2000, St. Peter Cathedral in Cologne asked me to make ceramic vessels that would be used for mass. I think that was because my fundamental philosophy about my work matched with the fundamentals of religion. Both are created for the people. As I remember, the priest at the cathedral said that Jesus would not want the chalices to be too lavish or created in gold or silver, which was why they asked me to make vessels made of clay.

You’ve lived in Germany for almost half your life. Does that mean that your works contain both Korean and German elements?

The pottery workshop that I run, Keramische Werkstatt Margaretenhohe in Essen, was built in 1928 for the laborers in the area. It inherited the Bauhaus philosophy of beauty, simplicity and functionality, which is similar to the silhak philosophy developed by Joseon-era scholar Jeong Yak-yong. The intersection of these two ideas are present in my work, which encompasses elements of Korean and German culture.