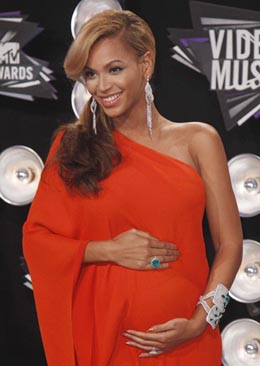 Beyonce places her hands on her belly as she poses at the 2011 MTV Video Music Awards in Los Angeles. [AP]

MTV, owned by Viacom, said that a record-breaking 12.4 million people watched Sunday’s live performance and awards ceremony from Los Angeles. Highlights included Beyonce revealing she was pregnant with her first child, Lady Gaga appearing in drag and the late British singer Amy Winehouse being remembered in a moving tribute.

Last year’s ceremony - where Gaga appeared in a dress made of raw meat - drew 11.4 million viewers, the biggest audience since 2002.

MTV said that 8.5 million of those watching on Sunday were aged 12 to 34, making it the most watched telecast of all time in that age group.

Katy Perry and Adele were the biggest winners, taking home three awards each, but it was Beyonce who was the story of the night.

Other reviewers and online fans highlighted the salute by Bruno Mars, Tony Bennett and Russell Brand to Winehouse, 27, who died of still-to-be-determined causes in London in July, and a simple, effects-free performance by Britain’s Adele.

The Los Angeles Times said Chris Brown’s “career rehab” performance - following his 2009 conviction for assaulting his then-girlfriend Rihanna - was also a strong moment in what was “a wildly inconsistent evening.”

The VMA show was broadcast on Sunday without a traditional host linking the various acts and presentations, but few critics seemed to lament the omission.