We always want what we can’t have

We always want what we can’t have 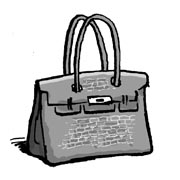 Pope John Paul II passed away on April 2, 2005, and two days later, a strange thing happened in London. People competed to purchase coffee mugs commemorating Prince Charles and Camilla’s wedding. The wedding was originally to take place on April 8, but when the pope died, his funeral was scheduled for the same date. So, the royal house of England rescheduled the wedding by pushing it to the next day. The commemorative mugs bearing the April 8 date sold out because people expected a souvenir with an incorrect date would be traded on Internet auction sites at premium. It is an example of how obsessed people are with scarcity.

We want something more if it is rare or unavailable, so scarcity is often used as a marketing strategy. Some restaurants refuse to accept customers after they run out of the ingredients prepared for the day, but this often causes people to queue up for something they think is rare and therefore valuable. This is the principle behind scarcity marketing. Ko Eun-ju wrote in “Luxury Brand Marketing” that manufacturers need to limit distribution even if there is no shortage of goods in order to make a product seem like an object that is worth the wait.

The most successful example of this strategy is the famous Birkin bag by French luxury fashion house Hermes. The company emphasizes that production of the coveted Birkin bags is extremely limited, and therefore, the bag is not something that people can buy just because they have money. People wanting a Birkin bag often wait at least a year or two before they can buy one. The wait is so long that people have joked that there is a waiting list to get on the waiting list for a Birkin bag.

In reality, however, the bag may not be so scarce. American writer Michael Tonello talks about his experience as a Hermes reseller in his book, “Bringing Home the Birkin.” For a while, the Birkin bag had a “mythical” existence like a phoenix or a unicorn. But one day, he purchased other goods from a Hermes store and was able to land a Birkin without any difficulty. After all, the bag’s scarcity was a marketing strategy. As of August 1, the waiting list for a Birkin bag in Korea contains more than 1,000 people. Those who are eager to pay 12 million won ($11,300) for a bag and put their names on the list may find Tonello’s experience upsetting, as their obsession fuels an advanced marketing tactic by Hermes. They may feel that they were easy prey - and I can’t say they’re entirely incorrect.