Korea will be model for Mexico’s green initiative

Korea will be model for Mexico’s green initiative 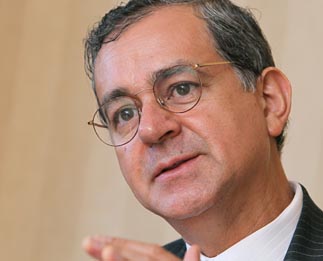 Korea’s green growth initiative, led by the Global Green Growth Institute in Seoul, is more than a rhetorical proclamation and is now providing real-world applications on the other side of the world, Mexico’s environment minister said yesterday.

Juan Rafael Elvira Quesada, Mexico’s secretary of the environment and natural resources, said in an interview with the Korea JoongAng Daily and the JoongAng Ilbo that Mexico was bidding to become a green growth leader in Latin America using an organization modeled after the GGGI.

“Korea is a very progressive country, and we want to learn from Korea’s experiences not only from the government but as well as from the GGGI,” said Quesada at a hotel in Seoul. “We want to continue these efforts in the western hemisphere.”

Quesada signed a memorandum of understanding (MOU) with the GGGI yesterday for bilateral cooperation in dealing with climate change including sharing green growth practices, mutual training and capacity building in technical areas.

He said the MOU will also help the Mexican Centre for Sustainable Economy, a research institute established in December, better apply the practices learnt from the GGGI to meet the regional needs in Mexico and other Latin countries.

The minister said the establishment of an institute like the GGGI is very important in finding useful tools against climate change given how rapidly the consequences have materialized, especially in the northern hemisphere where Mexico is located.

North America as well as other parts of the world are also taking the blunt of fast climate change, he said.

“We are seeing hurricanes in New York, something we never saw in the past. We see more negative consequences of climate change,” he said. “We need to find some answers.”

Mexico, like Korea, is not legally bound by compulsory carbon emission commitments under the Kyoto Protocol, which is scheduled to expire at the end of next year.

The minister said a legally binding agreement to cut carbon emissions - like the Kyoto Protocol - should exist, but the prospects for finding its alternative at the next conference, which is to be held in Durban in November, are not optimistic.

Still, Mexico, the host of the 2010 United Nations Climate Change Conference, is trying to provide possible workable solutions to deal with the problem, like the green climate fund agreed upon in Cancun, Quesada said.

“We need to continue giving successful examples and having another future plan,” he said.