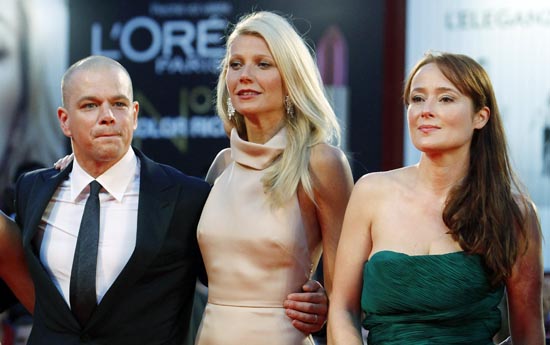 Certainly, audiences may look more warily at public door handles and subway hand rails after watching the film about the global spread of a lethal surface-borne virus with a kill rate of about 25 per cent.

“It is impossible, once you start thinking about it, to stop thinking about it,” Soderbergh said at a news conference ahead of the film’s world premiere out of competition at the Venice Film Festival on Saturday.

“I’m washing my hands a little bit more. But since I showed up in Venice, I have been shaking hands, a lot. I was on an airplane, which is one of the worst places you can be. This is just the world we live in.”

The film recalls in some ways the ensemble cast of disaster films such as “The Poseiden Adventure” and “The Towering Inferno” produced by Erwin Allen in the 1970s.

“Contagion” features Matt Damon, Gwyneth Paltrow, Kate Winslet, Jude Law and Lawrence Fishburne in a fast-paced drama that depicts the rapid spread of a lethal virus with no available vaccine.

Damon plays Mitch Emhoff, a father trying to protect his daughter from infection after his wife Beth, played by Paltrow, succumbs to the virus after a trip to Hong Kong.

Fishburne is Dr. Ellis Cheever, the cool-headed deputy director of the Centers for Disease Control, who dispatches Winslet, Dr. Erin Mears, to Minnesota, where the Emhoffs live, to figure out how fast the virus is spreading.

Law plays a muckraking San Francisco blogger, Alan Krumwiede, whose character provides 12 million unique viewers a day suggestions of conspiracy theories about the virus’ spread and government efforts to contain it and develop a vaccine.

“There is a certain amount of conflicting and misinformation, and conspiracy that inevitably makes its way around the world with the same progressive force and the same spread as the virus,” said scriptwriter Scott Z. Burns.

Soderbergh said he was actually thinking more of “All the President’s Men” when he made the movie.

“Scott and I, I think, were interested in making a procedural that was realistic, obviously, in its content, but stylistically also very simple, very clean. So that’s the film I was thinking of most,” Soderbergh said.