Rare displays of sex and death

Rare displays of sex and death 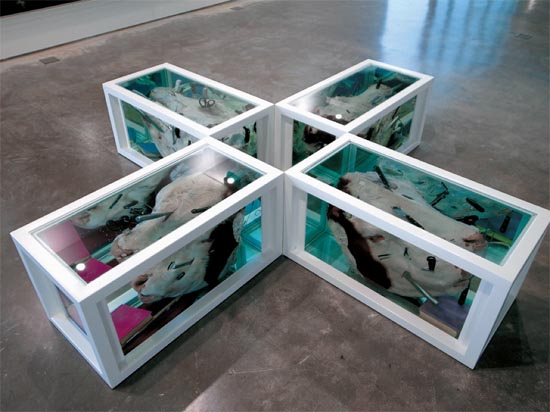 
Eros and Thanatos, or sex and death, are a human obsession, so it is fitting that they be the subjects explored by four of the world’s most provocative contemporary artists in the ongoing exhibition “Francois Pinault Collection: Agony and Ecstasy” at SongEun ArtSpace in Cheongdam-dong, southern Seoul.

One of the most arresting exhibits on display is the creepy installation titled “Matthew, Mark, Luke and John” (1994-2003) by British artist Damien Hirst. It comprises four vitrines arranged in the shape of a cross, with each containing a real bull’s head stabbed with knives and sitting in formaldehyde.

Less grotesque but no less thought-provoking is the “Balenciaga” photo series by American artist Cindy Sherman, which shows the artist dressed up as various middle-aged women in luxury clothes and heavy makeup. With their exaggerated expressions of enthusiasm and telltale wrinkles, the women seem to be desperately fighting the flow of time as they edge closer to decrepitude and death. 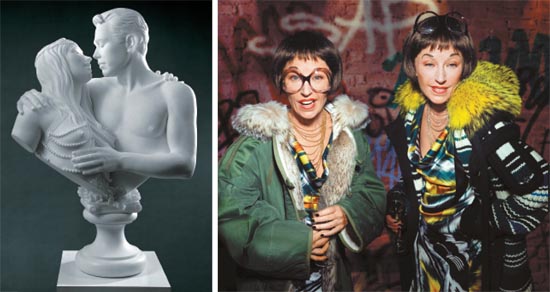 
Elsewhere, we see sculptures of manga characters with exaggerated sexuality in “Hiropon” and “My Lonesome Cowboy” by Japanese artist Takashi Murakami.

The works are from the collection of Francois Pinault, a major shareholder in Christie’s auction house and founder of business group PPR, which has as subsidiaries luxury fashion brands such as Gucci and Balenciaga.

It is the first time that a selection of works from the collection of Pinault, one of the world’s most influential art collectors, has been exhibited in Asia.

Francesca Amfitheatrof, the curator of the exhibition, explained that the show’s title “Agony and Ecstasy” was inspired by Hirst’s butterfly diptych and Irving Stone’s biography of Michelangelo that was derived from the Renaissance master’s correspondence.

“Michelangelo’s depiction of man is a striking example of the power of art,” she said. “To all four artists represented in this show, the human body becomes both subject and medium.”

The exhibition starts on the second floor with Murakami’s works, which “expose the Otaku culture’s obsession explicitly,” according to Amfitheatrof. On the third floor are Koons’ works, which hover “on the boundary between art and real life” and Sherman’s photos, which are “at the same time attractive and repellent.”

The highlight of the exhibition are the works by Hirst on the fourth floor. Most of the works on display indicate the artist’s obsession with the theme of death, which has been the driving force of his art since he appeared on the art scene in the early 1990s as one of the Young British Artists or YBA.

Here, the bull’s heart penetrated by a dagger in formaldehyde in his “The Kiss of Death” shares space with the painting “Turn Away From Me,” which is reminiscent of the British painter Francis Bacon’s (1909-92) dark and distorted portraits.

“These pieces are talking about violent death,” Amfitheatrof said. “The painting reflects the artist’s shock after Angus Fairhurst, his friend and fellow YBA, hanged himself in 2008. It was influenced by Bacon, who has been a constant inspiration to Hirst.”

She continued: “Hirst allows us to stare at death, to celebrate it and to fear it all at the same time. By freezing the moment of death and immortalizing it, he allows us to approach and understand death and to also celebrate life.”

Jeff Koons reflects on his art 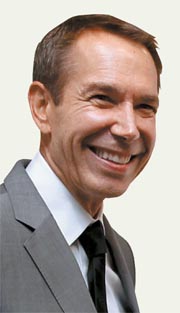 Jeff Koons, one of the world’s most celebrated artists, said that the three of his works chosen for an exhibition in southern Seoul are a “good choice” to help viewers understand his art, though they don’t include his recent signature pieces - balloon-like steel sculptures with highly polished surfaces.

The “Agony and Ecstasy” exhibition at SongEun ArtSpace shows three works by the 56-year-old artist selected from the Francois Pinault Collection: the marble sculpture “Bourgeois Bust ? Jeff and Ilona” (1991); the oil painting “Dutch Couple” (2007); and a flat sculpture with a mirror-like surface entitled “Olive Oyl (Red)” (2004-09).

“The reflective aspect of Olive Oyl is very true to the reflective qualities of my [steel] sculptures,” Koons told reporters during a press preview on Friday. It was his second visit to Korea.

Koons said mirror-like surfaces have special meaning for him. “Mirrors demand your image,” he said. “If you leave ‘Olive Oyle,’ it remains empty. When you come back to it, it is made complete as a work of art with the addition of your reflection.”

Koons also talked about the other works, saying that “Bourgeois Bust - Jeff and Ilona,” which shows the artist embracing his wife at the time, Ilona Staller, shows a mixture of desire and a sense of guilt. He said the painting “Dutch Couple,” which is covered with many layers of paint, is about the “yearning to have a dialogue.”

“To understand Koons’ art, one has to go beyond the kitsch or the ironic language,” said exhibition curator Francesca Amfitheatrof. “Koons uses this medium because it neither alienates nor speaks down to the viewer, thereby liberating the viewer and making the experience an instrument of empowerment.”

Koons also expressed his views about art collecting, saying that “Collecting is a gesture and sharing of viewpoints.”

He said that Pinault is a great collector who shares art with the public and that he does a fine job of protecting the works.

Collector’s choice is by heart 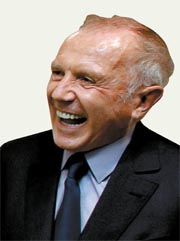 Francois Pinault, a business tycoon and influential art collector, said he depends on his “eyes rather than [his] ears” when choosing art works for his collection.

“In other words, rather than following trends or listening to critics, I follow my feelings,” he told reporters in a press preview of the “Agony and Ecstasy” exhibition at SongEun ArtSpace in southern Seoul on Friday. “When my heart skips a beat, that’s the work I choose.”

Pinault was voted the most powerful figure in modern art by ArtReview in 2006 and 2007.

The show at SongEun features 22 pieces by four renowned contemporary artists - Damien Hirst, Jeff Koons, Takashi Murakami and Cindy Sherman - from Pinault’s extensive collection of 2,000 works, which are kept at two museums he owns in Venice - the Palazzo Grassi and Punta della Dogana.

The 75-year-old tycoon said he started collecting art when he was in his 30s.

“Until I was around 30, I had not visited an art museum, as I was brought up in the countryside,” he said. “At first I took interest in figurative art, as most people do. Since then, I have broadened my horizons, shifting the focus of my art collection from Impressionist paintings and then Cubist paintings to contemporary art works.”

Asked why he focuses on contemporary art, he said, “I am an entrepreneur, so I’m always thinking about the future. In art, I also want to see the present and the future, so I’ve been visiting contemporary artists’ studios and collecting their works.”

Lee U-fan’s works are among the works by Korean artists in Pinault’s collection, he said. “He is not yet very famous internationally but he soon will be.”