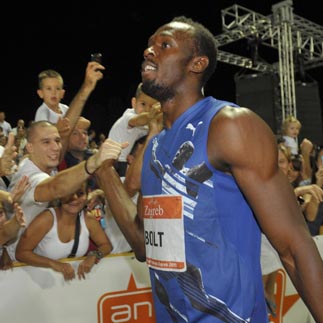 Usain Bolt is congratulated by fans after winning the 100-meter race at the IAAF Grand Prix in Zagreb, Croatia on Tuesday. [REUTERS/YONHAP]

ZAGREB, Croatia - Usain Bolt made a cautious start in his first 100-meter race since his disqualification at the World Championships in Daegu last month, and still ended up winning in a season-best 9.85 seconds at the Zagreb World Challenge on Tuesday.

Bolt, who false-started in Daegu to end his hopes of defending his world title, shaved 0.03 seconds off his previous fastest time this year - 9.88 in Monaco in June - on a warm, still night.

“It was a poor start,’’ said Bolt, the world and Olympic-record holder.

“I kind of lost concentration and just went through the line. It was OK, I suppose, but I could have done better, especially with the weather like that.’’

Kim Collins of Saint Kitts and Nevis ran a season-best 10.01 seconds to finish second, ahead of Trinidad’s Richard Thompson at 10.03.

“It was wonderful, the crowd here,’’ Bolt said.

“I loved that they were excited and that the fans come up to me. I’m always grateful for that.’’

The appearance of local favorite Blanka Vlasic in the women’s high jump also delighted the home crowd, although she eventually succumbed to world champion Anna Chicherova. Both cleared two meters, with Chicherova declared the winner after Vlasic, who was carrying a leg injury, missed on the first attempt.

“It was important for me to clear two meters today. It will be difficult to improve this season,’’ Vlasic said. “I’m delighted that the fans were treated to a spectacular meet because I practically grew up in this stadium.’’

In the men’s 110 hurdles, Cuba’s world-record holder Dayron Robles beat world champion Jason Richardson for the second race in a row. Robles finished first at the World Championships but was disqualified for impeding Liu Xiang of China, giving Richardson of the U.S. the gold.

Richardson, who was also beaten by Robles at the Weltklasse in Zurich last week, set a personal best of 13.04 seconds, but Robles won in 13.00 seconds. David Oliver of the U.S. was third in 13.20 seconds.

Carmelita Jeter claimed the women’s 100 meters in 11.00 seconds. The American was pushed hard to the line by Schillonie Calvert of Jamaica, who finished in 11.13 seconds.