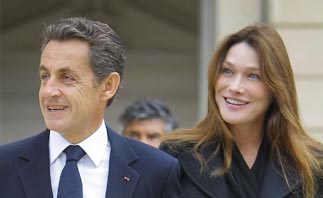 “He knows all the Latin names for flowers,” Bruni told Newshour radio show guest presenter Christine Ockrent in an interview that was scheduled to be aired yesterday.

“I was really impressed ... walking around the garden in the Palais of the Elysee, he was giving me all these details about tulips and roses and I said to myself: ‘My God I must marry this man, he’s the president, and he knows everything about flowers as well, this is incredible!’”

Bruni, who is expecting a baby in late October, told Belgian journalist Ockrent her reluctance to talk about her pregnancy stemmed for her superstitious nature and because it was “so uninteresting for French people.”

Singer-songwriter Bruni said marrying the president was “very rock and roll” for both parties but added that the stress of Sarkozy’s schedule meant the couple strived for “a quiet, relaxing life” during their rare moments alone.

Bruni, 43, has long been a champion of left-wing causes. She raised eyebrows when she entered into a relationship with the more conservative French leader. However, Bruni argued that by U.S. standards, the president was “almost a left-wing Democrat”.