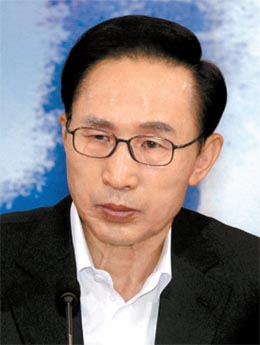 President Lee Myung-bak broke his silence yesterday about the recent graft accusations against his key aides, ordering a thorough investigation.

“I see corruption allegations against my aides,” Lee was quoted as saying at a cabinet meeting at the Blue House yesterday by his spokesman Park Jeong-ha. “The situation is so grave that I cannot leave it unattended.”

According to Park, Lee sternly warned members of his government to maintain their integrity and transparency, calling it an important goal of his administration. “The crisis was prompted by the so-called confidants who have failed to separate their personal lives from their lives as public servants,” Lee was quoted as saying. “Public servants must work with a new determination, and the people working in the cabinet, Blue House and near the president must remember this.”

Lee also ordered the Ministry of Justice to investigate the corruption allegations of his aides quickly and thoroughly.

“Cases against my relatives and aides must be investigated more sternly,” Lee said. “That will allow us to achieve the goal of building a transparent administration and an advanced country.”

He also ordered government ministries to work on measures to prevent further irregularities.

Lee’s remarks were his first response to allegations raised against people around him in two separate scandals. Kim Du-woo, former Blue House senior secretary for public affairs, has faced a probe by prosecutors as to whether he received bribes from Park Tae-gyu, a lobbyist for Busan Savings Bank, to save the suspended financial group. More recently, SLS Group Chairman Lee Kuk-chul has publicly stated that he “sponsored” a group of Lee aides for many years with cash, gift certificates or free entertainment.

Following Lee’s warning, the Blue House yesterday convened a meeting with the heads of law enforcement authorities, chaired by the presidential chief of staff, Yim Tae-hee, to discuss ways to root out abuse of power and corruption from the administration. Attending the meeting were the justice minister; the Blue House civil affairs secretary; heads of the National Police Agency, National Tax Service and Financial Supervisory Service; and senior representatives from the Board of Audit and Inspection and the Prime Minister’s Office.

“In addition to the strong warning from the president, this meeting will serve as an alarm bell to members of this government,” said a presidential official.

“We have decided to have weekly working-level meetings of the government offices that participated in the discussion today to improve information sharing and act preemptively,” Yim, the presidential chief of staff, said after the meeting.

Aides, relatives and top public servants will be the objects of special surveillance to detect corruption, Yim said, adding that top officials have agreed to work toward “self-purification.”

“Until now, investigations only took place when allegations were raised at the National Assembly or by the media,” Yim said. “But from now on, we will thoroughly look into rumors and suspicions. We also want to spot accusations with malicious intent.”

The recent scandals hurt the administration’s image because Lee has long said that his presidential victory was based on a campaign free from illegal political funding. He has also vowed repeatedly to make sure his presidency would be free from abuse of power and influence peddling scandals, unlike past administrations. His campaign of building a “fair society” was also linked to that idea.

It remains to be seen if prosecutors will reopen their investigation into the allegations of SLS Chairman Lee. The prosecution said Monday that there were no grounds to push forward the investigation other than the businessman’s unverified claims.

At the National Assembly’s audit on the prosecution, lawmakers from the opposition Democratic Party demanded probes into the businessman’s claims against Shin Jae-min, former vice minister of culture, and other presidential aides. In contrast, the ruling Grand National Party lawmakers urged the prosecution to carry out its investigations carefully, calling the businessman’s disclosures “groundless and reckless attempts to regain the management right over his company.”

Choi Gyo-il, head of the Seoul Central District Prosecutors’ Office, replied to lawmakers that the prosecution will not be swayed by outside pressure.

Three of the aides accused by Lee Kuk-chul for having received his money asked the prosecution yesterday to investigate the businessman for defamation. Kwak Seung-jun, chairman of the Presidential Council for Future and Vision, Lim Jae-hyeon, Blue House secretary for policy promotion, and Park Young-june, former vice minister of knowledge economy, said Lee made groundless claims with malicious intent to disgrace them and the government, asking for a thorough investigation.

At the hearing, Kim admitted to having received expensive gifts from Park, but denied that he gave favors in return.