It could be anything from corn as a pizza topping to girls in hot pants dancing outside of a new store, but there are lots of amusing social and cultural practices to uncover in the hustle and bustle of modern Korea.

So whether you are staying for a short time or are here long term, keep your eyes peeled for glimpses of the customs and trends that make Korea such a unique, quirky place to be. 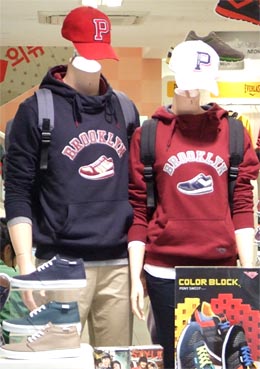 A local store features couple clothing in its display window. By Michelle Kang

Have you ever been at a party and spotted someone walking towards you, wearing the exact same thing as you are? I go out of my way to avoid standing near someone wearing the same shirt as mine. What about you? Are you cool with it or do you react the same way, turning on your heel, pretending you didn’t notice them? If it happens to you in Korea, there’s a good chance you’ve just bumped into your boyfriend or girlfriend.

Korean couples of a certain age tend to wear and buy matching outfits, often giving them to each other as Valentine’s Day or birthday gifts. I have a couple of theories about what lies behind this tendency.

Maybe they want to feel more emotionally attached to each other. Perhaps it is a way to advertise a romance publicly yet unofficially. Or it could be a sign of possession, in the same way that some single women wear a ring on their wedding finger when they go out so as to avoid unwanted attention from men.

It is not unusual to find couples in matching attire wherever you go around the country, but it is particularly common on Jeju Island, a popular honeymoon destination packed with happy couples in couple clothing. It seems like these newlyweds have a subconscious desire to announce to the world that they are madly in love by adorning themselves from head to toe in identical outfits. In their coordinated clothing, with their arms entwined and not an inch of space between them, they look more like a two-headed beast than separate individuals.

But couples are not always content with matching only their clothing. Some have matching rings, cellphone charms, shoes or hats - you name it and some couple will be wearing it.

One thing that remains a mystery to me, however, is the mechanics of going about it. It takes me long enough to figure out what I’m going to wear each day, never mind having to make sure I match somebody else! Do couples phone each other the night before and discuss which clothes they will wear the next day?

I wonder if busy people save time by planning an entire week’s worth of matching wardrobes in advance. Please let me know if you know the secrets of successfully matching your wardrobe to that of your loved one. 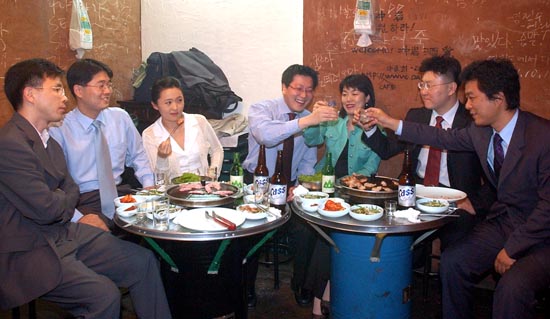 Co-workers attend a hoesik, or company outing, at a local restaurant. [JoongAng Ilbo]

You’ve just finished your first day at a new company and are ready to finally head home. All of a sudden, your boss and colleagues invite you - command you - to go with them to an after-work party where they throw down drinks like it’s the end of the world and never stop refilling your glass of soju.

The next morning you wake up suffering from a serious hangover and a splitting headache, thanks to a few glasses of somaek (a potent mixture of soju and beer that’s similar to a boilermaker) and a night that took in several locations and continued into the wee hours.

Hoesik literally means “gathering to eat” and refers to a company dinner where co-workers dine and drink together after work. Korean hoesik culture stems from the belief that alcohol acts as the ultimate social catalyst to strengthen bonds and break down barriers between co-workers by creating a relaxed setting in which everyone can mingle regardless of one’s position on the corporate ladder.

A typical hoesik consists of several “cha,” or venues where people stop for a drink or meal. Generally, the same pattern is followed. At ilcha (round one), many drinks are exchanged over samgyeopsal (pork belly) or galbi (short ribs) at a nearby barbeque restaurant. Then the group will move to a bar for a few beers, followed by a third stop at a noraebang (singing room). Of course, more cha can be added, depending on the group’s mood or, sometimes, the boss’s orders.

Going to a noraebang at the end of the night is something everyone should experience at least once. Full of the party spirit, this is where straitlaced Korean businessmen really let their hair down. Neckties wrapped around their foreheads Rambo-style, holding up fire extinguishers as if they’re professional cameramen, or wrapped up in toilet paper to look like Egyptian mummies, the intimidating managers and bosses you try to avoid at work often turn into the life of the party.

It’s not everyone’s cup of tea, of course, and hoesik culture is changing. For many people, the prolonged duration and sometimes excessive consumption of alcohol is not something to look forward to. It can feel like an obligation, a protracted extension of work, sitting next to your tipsy boss when you just want to be relaxing at home. Female employees are often uncomfortable with the fratboy atmosphere, and workers with young families resent the loss of precious time with their children.

To eliminate some of the negativity surrounding hoesik and to make the night more enjoyable for a higher number of employees, a new trend is emerging. Instead of alcohol-driven partying, many companies now go to dinner at a family-style restaurant, maybe have a glass or two of beer or wine, and then take part in a cultural or sporting event, such as a movie, a baseball game or a trip to a bowling alley.

Regardless of how your workplace does it, a hoesik is an important part of business and social life in Korea. So, the next time a new colleague joins your team why don’t you take the lead? Give your boss a nudge and say, “Let’s have a hoesik tonight!” 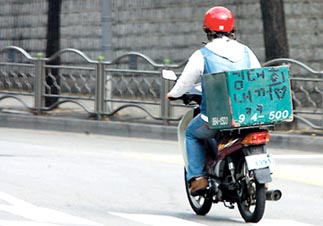 Food delivery by motorcycle is a common sight in Korea. [JoongAng Ilbo]

Waking up on a lazy Sunday morning, your growling stomach leads you to open the fridge, only to find a bottle of water and leftovers from who-knows-when. Your messy bed-head tells you that a shower is a must before you can leave the house to hit the market for groceries, but hunger is taking priority. Oh, dear! Get your phone and dial for help - grab the yellow pages and call your friendly neighborhood superhero.

Your rescuer will soon be flying through the urban sprawl - on his trusty red scooter. Although he doesn’t wear a cool spandex costume like Superman (apart from one chicken restaurant I’ve spotted that actually does have its drivers dress this way), he is equipped with the ultimate weapon to save you: a steel box full of your favorite food.

Food delivery in Korea is entirely dependant on motorcycles and scooters. Usually the food is stored in a large metal box mounted behind the driver, but quite often you see a delivery man zooming down the streets and sidewalks steering with one hand while the other is hanging onto the box.

What can be delivered is not only limited to the usual pizza or Chinese, but includes a wide variety of food, ranging from fried chicken and hot stew to hamburgers and french fries. In 2008, Mc- Donald’s launched its delivery service in Korea, leading other fast food joints like KFC and Lotteria to quickly follow suit.

Most restaurants that offer home delivery services bring the food in 30 minutes or less. While that may not sound like anything special, if you’ve ever tried to find a specific location by relying only on Korea’s confusing address system, it’s almost impossible.

The most awesome feature of food delivery in Korea is that the food arrives on real dishes with silverware, not in those plastic disposable containers that are so harmful to the environment. You simply leave the dirty dishes outside your door when finished, and the delivery man returns to your place later on to pick them up.

Another great feature is that food can be delivered not only to apartments and offices, but also to customers seemingly in the middle of nowhere: from sunbathers relaxing on a beach in Busan to families wanting to picnic along the Han River. I’ve even seen delivery men handing plates of food over the fences at crowded outdoor swimming pools. Leaflets with menus and phone numbers are often handed out at parks, especially during events like fireworks shows or outdoor concerts, and the motorcyclists zipping around are hard to miss, dropping off hot food for people to dine al fresco.

The only question here is how to describe your location. There are no sections or slot numbers at parks and other public places and there are often hundreds or thousands of other people nearby. Not to worry. An order made via cellphone guarantees you chicken and beer or jjajangmyeon (black bean paste noodles) in no time.

There’s no doubt about it - the food delivery system we often take for granted in Korea is definitely a magical thing.