Children’s bathrooms with smaller bathtubs and lower sinks are to be offered at the Eileen’s Garden apartment complex in Ujeong Innocity, Ulsan, built by IS Dongseo.


This Friday, some 2,409 apartments in a Prugio-brand apartment complex in the new administrative capital Sejong City in South Chungcheong will be offered for presale by Daewoo Engineering & Construction.

It might seem like just another apartment offering this fall, the traditional moving season, but take a closer look. A whopping 93 percent of the homes on offer are apartments of less than 85 square meters (915 square feet). Some 200 apartments were shrunk from the original plans by Daewoo E&C.

Since the 2008 financial crisis took the wind out of the local housing market, the slump in real estate sales has been a blight on several fronts. Several midsized builders have gone bankrupt, one-third of the country’s savings banks (in terms of assets) have been shut down after their construction project loans went sour, while household debt levels have snowballed as people’s capital remains tied up in apartments and houses they don’t want to sell because of the low prices.

However, this fall may bring back some of the groove in the housing market as some 46,000 apartments will be put up for presale during the month of October alone, according to Joinsland, a real estate data provider and affiliate of the Korea JoongAng Daily.

This is the largest number for a single month this year and 4.3 times the amount made available last October. Many hopes that recently relaxed government regulations on reselling houses will give some kick to the market.

And developers and construction companies are pinning their hopes on a strategy to break their losing streak. They hope that smaller units, and specially designed homes, will lead to sales. They call it the “Three S” approach. 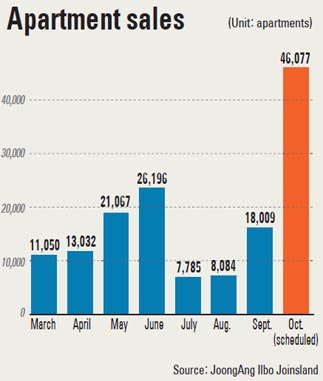 Redevelopment projects, demolishing old and run-down apartment complexes built during Korea’s rapid economic expansion period to build new complexes, was the rage during the middle of the last decade.

Redevelopments were popular as demand was flush for brand new homes in what were often prime locations, and property values skyrocketed. The owners of the old apartments got shares in the new complexes.

On Sept. 30, some 2,397 units at the redeveloped Raemian Jeonnong Crecity apartment complex in Jeonnong-dong, central Seoul, went into sale with the opening of a model home. The apartments will sell for an average of 14 million won ($11,858) per 3.3 square meters - drastically lower than the 17 million won expected back in 2008.

“The [housing] sale market in the metropolitan area is in a slump, and it’s advantageous to finish sales early even if we must cut prices,” said Lee Sun-hyung, an official at Samsung C&T, the construction firm in charge of the redevelopment.

“It’s more secure to complete the sale process within a short time,” said Noh Min-ho, a Daewoo E&C official. “This is why the sale price has been dropped as much as it could be at the expense of the profit margin.”

Left: Apartments with interior decoration inspired by traditional Korean homes are being offered by Fides Development at the Woomi Fahrenheit apartment complex in Mokpo, Southern Jeolla.
Right: Vacation homes of 66 square meters line the side of a forest in Yangpyeong, Gyeonggi. The preference for smaller housing is dominating the vacation-home business as well, with many being built between 33 and 66 square meters rather than 165 square meters or bigger as in the past, according to developers such as Iddang Development. Provided by the companies

These days, houses larger than 85 square meters are all but disappearing from the newly built housing market.

At the second Ssangyong Yega apartment complex in Chimsan-dong, Daegu, built by Ssangyong Engineering & Construction, 96 percent of the 657 apartments are smaller than 85 square meters - a roughly 12 percent increase from the original plan of 86 percent.

“After the [2008] financial crisis, the housing market wouldn’t budge for anything except for actual demand,” said Ssangyong E&C official Ban Wang-gun, meaning that as investment or speculation in real estate dried up, the only purchasers were people wanting to live in the homes they were buying. “And currently people are only interested in smaller units, so we are increasing their number as much as we can.”

Posco Engineering & Construction has also switched tack for its complex of 1,408 apartments at the Songdo International Business District in Incheon. Although it had planned to only offer 25 percent of the apartments as medium-small units, it’s in the process of changing the blueprints to increase their proportion to 85 percent.

Demand for smaller housing has been rising in the face of a listless real estate market as they require less capital. Other reasons are the shrinking size of families due to low birthrates and other societal factors, as well as advances in architecture and design that allows for more effective use of space.

“Another reason that medium-small units have been increasing is the government’s recent deregulation in rental housing,” said Lee Hong-il, a researcher at the private think tank Construction and Economy Research Institute of Korea. “The industry is expecting more investments in smaller homes for rental purposes.”

A desire to own products that fit one’s personal needs and tastes is a trend across all consumer goods - and the trend is also driving Korea’s housing market.

Specialized apartment designs and interior decorations are increasingly replacing the cookie-cutter designs of apartments during the nation’s economic boom years.

One trend is an advanced apartment design that allows for the maximum use of small spaces. At the Eileen’s Garden apartment complex in Ujeong Innocity, Ulsan, being sold by builder IS Dongseo, units are outfitted to create an extra bedroom with temporary walls. Other units have children’s bathrooms with small bathtubs, toilets and sinks designed for children.

Some apartment complexes have bolstered the functions and designs of first-floor units, as they are often less popular than higher units.

At the Gyeyang Centreville apartment complex in Gyulhyeon-dong, Incheon, being developed by builder Dongbu Corp., the first- and second-floor units are outfitted with special glass that cannot be looked through from the exterior. At the Sharp Lake Park apartment complex that Posco E&C is building in the new administrative capital Sejong City, the first- and second-floor units have terraces with a prime view of a lake in front of the complex.

“We have eschewed the stifling, cookie-cutter design common in apartments to allow occupants to experience the pleasant and laid-back atmosphere of a traditional Korean home,” said Kim Seung-bae of Fides Development.