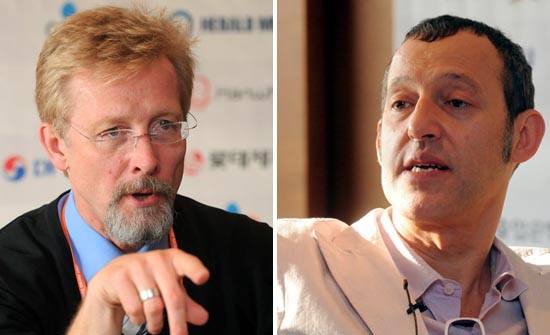 
Today companies across the world, including in Korea, can no longer satisfy the appetite of customers with only cutting-edge technology.

In consumer products ranging from automobiles to cosmetics and even water bottles, design is a major contributing factor in determining success.

This week, world-renowned industrial and automotive designers Karim Rashid and Chris Bangle visited Seoul to attend a forum where they talked about revolutionary changes in Korean product design as well as their design philosophies.

Both designers are currently collaborating with leading Korean companies including LG Electronics and Samsung Electronics in designing consumer goods.

Bangle, who was the chief designer at BMW and worked at the German automaker for nearly two decades, signed a contract earlier this year with Samsung Electronics to design various products for the company.

Bangle noted that the world’s recognition of Korean product designs has improved vastly.

Bangle said particularly he and his students were more than impressed with the rapid progress that Hyundai Motor has made in its design when they visited the motor show in Geneva earlier this year.

He said in the past that the Korean automotive group’s designs were excessively abstract and that made them less appealing. But the new design, which was distinctive, even made him wonder if other European automakers were trying to copy Hyundai Motor’s design.

However, Bangle noted that a language barrier still remains as an obstacle when working with Korean companies. He said in the design industry half of the work is done through communication and that it is unfortunate for a designer to work with staff while translating in a foreign language.

Rashid was more critical than Bangle. The New Yorker said he saw the Seoul government’s advertisement on so-called “Design Seoul.” He said it was hard to understand what it was supposed to mean.

The Seoul government under former mayor Oh Se-hoon had been pushing “Design Seoul,” which was to turn Seoul into a design-oriented city. This included what the former mayor called a “Han River Renaissance” project that would refurbish parks, bridges and other recreational facilities along the Han River. The floating island on the bank of the river near Banpo Bridge is one of such Design Seoul projects.

The two designers, however, agreed that innovation was at the center of design today.

Rashid recently designed a refrigerator that is only 30 centimeters deep, which is only half of the depth of existing refrigerators. The designer said he changed the design to be shallower because people forget about food in the back of the refrigerator and the food rots.

However, the refrigerator was never commercially launched due to its radical design. He also designed an oval shape frameless TV for Samsung Electronics two years ago, which also failed to launch. Rashid said he doesn’t understand companies that do not like to try new things and added that companies that fail to take risks cannot survive.

Bangle said it is a wonderful experience to expose a designer who is accustomed to established education to an irrational and sensory-oriented environment and let them open their eyes and be exposed to new ideas.