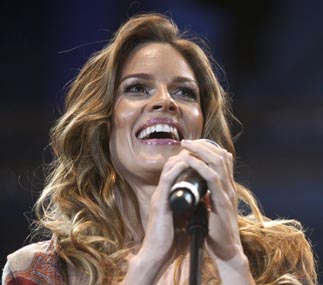 LOS ANGELES - Actress Hilary Swank is donating her fees for attending a controversial event in Chechnya to charity after criticism from human rights groups.

A spokeswoman for the two-time Oscar winner said on Friday that Swank would give her personal appearance fees to various charitable organizations.

Swank has said she “deeply regrets” taking part in a birthday celebration in the Chechen capital Grozny last week for regional strong Ramzan Kadyrov, who is accused of orchestrating human rights violations. Human Rights Watch urged Swank and other celebrities who attended the event to return any money or gifts.

Swank said this week she was unaware of Kadyrov’s policies, which human rights groups say promote fear, abductions and executions of those involved in Chechnya’s Islamic insurgency.