Helping others is secret to Denmark’s happiness

Helping others is secret to Denmark’s happiness 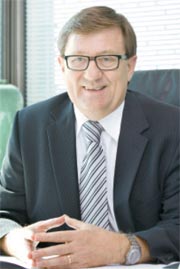 Danes rank as one of the happiest people in the world. The high-ranking is attributed at least in part to Denmark’s legendary social equality and strong social safety net.

“If I have to explain why Danes seem to be the happiest people in the world, I would sum it up basically with two things: a large extent of equal opportunity for all Danes and a very comprehensive safety net,” said Peter Hansen, Danish Ambassador in Korea, in an interview with the Korea JoongAng Daily.

“Since we have free education right up to university, you have as a child the possibilities of going all the way. You are not depending on whether your parents have a high income or low income.”

Not only does the Danish government support education for all, it pays an allowance for each student of about $600 to $700 per month, according to Hansen.

“When you retire, you also get a high retirement pension, which makes it possible for people to live a decent life even after you retire,” said Hansen. “It doesn’t matter if you are rich or poor, everyone gets the benefit.”

But of course, the money has to come from somewhere to offer these kind of benefits to people.

According to audit, tax and advisory services provider KPMG’s report last month, Denmark has the highest rate of income tax for a person earning at least $100,000, among 93 countries.

However, Danes, said Hansen, live with a philosophy that they should “help each other,” and that it is “a matter of course that you pay for what you get and it’s even better that what you pay is helping others as well.”

“Denmark has organized society so you pay a lot in tax but you also get a lot back from the government. That is why, in general, people are actually quite happy to pay high taxes,” said Hansen. “Of course, if you ask individuals, some might complain they are paying too much in tax but there is a general acceptance [in Denmark] that you have to pay high taxes in order to get the benefits from the government.”

Despite Denmark’s free education for all, only about 35 percent of high school graduates go on to university, said Hansen.

In Korea, on the other hand, last year’s college entrance rate was 79 percent, the world’s highest, according to the Center for Education Statistics.

“Korea has a high college-entrance rate, as having a higher degree is directly connected to getting a high-paid job.

“The country’s deeply rooted belief that ‘only the educated will be treated as human beings’ also contributes to the high rate,” said Lee Byung-hoon, a sociology professor at Chung-Ang University.

Hansen said that young Danes “can get a job they want even without a college degree and are treated equally,” and added that “many youngsters in Denmark go to technical schools to become brick layers or carpenters.”

Denmark also ranks No. 4 as the “best place to be a woman,” following Iceland, Sweden and Canada respectively, according to a report by Newsweek last month.

“About 80 percent of women in Denmark are in the labor market and the government offers nurseries and kindergartens for working mothers as well,” said Hansen. “Women can also take one year of maternity leave in Denmark and another half year of leave with reduced pay is also possible.”

The informal and relaxed lifestyles of Danes also contribute to their happiness.

“Danes enjoy working but they also enjoy living and that means doing other things than just work. We have six weeks of holidays for workers in Denmark and employers urge people to take all six weeks off work because it’s also important that people also relax,” said Hansen.

“Danes work to live and not live to work.”