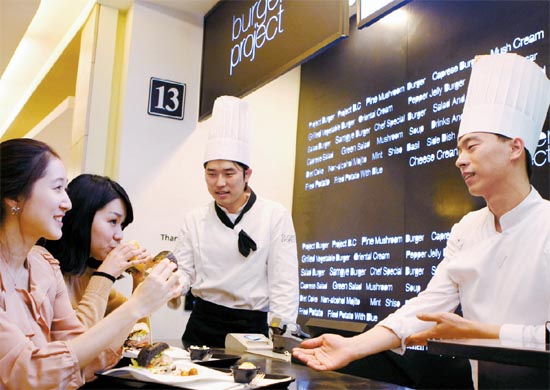 Consumers try some hamburgers at Burger Project in the deli section on the first basement floor of Hyundai Department Store’s COEX branch, southern Seoul. Provided by the company


Despite the common misconception that luxury brands and cosmetics attract the most consumers to department stores, it seems as though shoppers’ taste for fashion cannot compete with their desire to eat. Industry sources say that delicatessens and popular restaurants are the biggest people magnets and essential fixtures at most big Korean stores.

And the majority of those who go to do some food shopping or dine also splurge on accessories or designer goods while they are there.

According to data provided by Hyundai Department Store’s COEX branch that analyzed its consumers’ spending habits last year, 62 percent of deli customers not only visited the store to buy fresh baked goods, cheese, cold salads or wine, but also picked up goods in other areas of the big Korean store.

Meanwhile, data supplied by Shinsegae Department Store’s Gangnam branch showed that consumers who use the branch’s deli shops spend 246,000 won ($215) on average per year, slightly higher than other consumers there who spend a median amount of 215,000 won over 12 months.

While deli customers visit Korean department stores at least 6.4 times per month on average, the frequency rate for other shoppers is lower at 4.8. times per month. 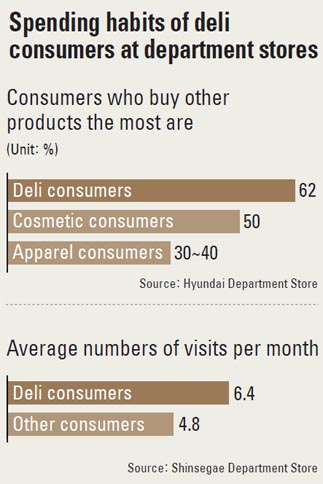 Now the nation’s three major department stores, also including Lotte, are moving aggressively to open restaurants and delis that can attract the hordes by word of mouth and glowing blog reviews.

Culinary staff at Hyundai, the country’s second-largest department store chain after Lotte, invited their colleagues to select the top delis in Seoul and report back.

After carefully examining the list, Hyundai’s food experts opened Sweety BLVD, a cafe specializing in macaroon-based desserts, in its deli section. Sweety BLVD is run by Tasty BLVD, a popular wine and steak restaurant based in Seoul’s affluent Cheongdam-dong in southern Seoul, that sells macaroons as its signature dessert menu.

Burger Project, a popular eatery that uses fish, squid, and wasabi as main ingredients, also opened in Hyundai’s deli section. The burger bar was hot-listed for having some of the best burgers in the country by food bloggers.

“Adding more delis to our stores to attract more young consumers will enable us to differentiate ourselves from our competitors,” said Lee Jeong-deuk, a Hyundai official. The store’s COEX branch began renovation work early this year and completed overhauling its deli section in May.

Refurbishment work is also taking place at the Myeong-dong headquarters of Lotte Department Store, the nation’s leader, which is busy reworking its cafeteria and deli section on the first basement floor of the building.

In July, the same Lotte store opened a branch of the French bakery Fauchon, which sells baked goods, cakes and imported teas, jams and wine. It also welcomed beef jerky specialist Bee Cheng Hiang after the Singaporean shop’s beef jerky become extremely popular among Korean tourists visiting Singapore as well as Hong Kong and China, where it also has outlets. Recently, Lotte Myeong-dong has expanded the number of its delis from 17 to 27.

In October, Lotte Myeong-dong opened Kare Katsu, a sister brand of the upscale Japanese pub and restaurant brand Daidokoro. Kare Katsu is run by a second-generation Korean -Japanese man at the store’s food court. Daidokoro, located near Seoul’s Hannam UN Village, is a popular pub and restaurant among business leaders and celebrities. It also runs another brand called Okatte in Apgujeong, southern Seoul.

The Gangnam branch of Shinsegae Department Store has been expanding its selection of delis since 2009. They now occupy 1,157 square meters of the first basement floor of the building, up from 932 square meters in 2009.

Ever since Shinsegae opened Dean & Deluca, a popular deli in New York, at its Gangnam branch last month, Shinsegae officials said the branch’s food sales have shot up 17.5 percent and the number of visitors heading to the food section has risen 33.5 percent.

“Since we added more food outlets at our Gangnam branch, we have seen a spike in sales and a surge in the number of consumers who visit our branch as more consumers are coming back to buy goods at the delis,” said Kim Woo-yeol, head of Shinsegae Gangnam.