Itaewon festival a draw for expats and tourists

Itaewon festival a draw for expats and tourists 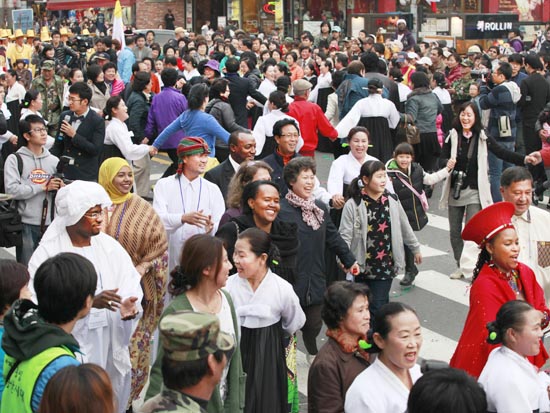 Expatriates, tourists and Koreans march in a parade held in Itaewon on Saturday as part of the Itaewon Global Village and Culture Festival, which continues through Sunday. By Park Sang-moon


Brass bands, circle dances and a parade filled the streets of Itaewon on Saturday, when roughly 170,000 Koreans and expatriates attended the Itaewon Global Village and Culture Festival in the district known for its high concentration of expats and tourists.

The festival was hosted by the Association of Merchants in the Itaewon Special Tourist Zone, which has hosted the festival twice a year, in spring and fall, for a decade. It was sponsored by the Yongsan District Office.

This fall’s festival continues through Sunday in the area from Hangangjin subway station to Noksapyeong Station.

The highlight of the opening ceremony on Saturday was a large parade led by 1,500 participants, who marched the 1.3-kilometer route through Itaewon. The festival’s coordinators said the scale of the parade was unprecedented.

The parade was populated with color guards, military bands, a group of expat dancers, a samulnori percussion quartet and performers from the musical “Nanta.”

One of the most distinctive performances in the parade was by a traditional military band, whose members were dressed in dazzling yellow, leading expatriates and tourists to take pictures with their cameras and iPads.

The event included a performance of the traditional circle dance Ganggangsullae and a taekwondo demonstration.“I love the parade and it is really interesting,” said Christine Coignet, a French tourist who is taking a one-month trip in Korea. “It’s my first time to visit Itaewon.”

A string of temporary sidewalk restaurants beckoned hungry visitors, who were invited to sample a variety of international dishes from Asia, Europe and the Americas.

The canteens in the Asia zone featured 16 traditional Korean dishes and street food such as tteokbokki (spicy rice cakes) and makgeolli (rice beer).

“We’re excited to be at the festival,” Rebecca Radchad, an American tourist, said. “Seoul is a clean city, people are friendly, and we’re really enjoying the festival.”

Meanwhile, a booth selling “Dokdo cookies” was crowded with patriotic Koreans. The booth was set up by a group of civil activists who claim Korea’s sovereignty over the Dokdo islets and a group of environmentalists interested in protecting the islets’ natural environment.

“We have held this festival for a long time in an effort to promote Itaewon and attract tourists to the region,” said Jeong Gyeong-hun, director general of the Association of Merchants in the Itaewon Special Tourist Zone. “In the beginning, we hosted the festival with our own funds, but now that it is popular, it is sponsored by the local district office.”

He added that they will hold another festival in the spring.