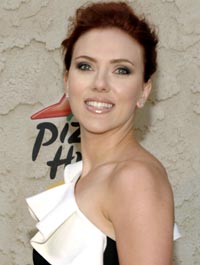 LOS ANGELES - Actress Scarlett Johansson has addressed her nude photo scandal from earlier this year, saying there was nothing wrong with her taking the photos, in an interview with Vanity Fair on Tuesday.

“I know my best angles,” said Johansson. “They were sent to my husband,” referring to her now ex-husband, Canadian actor Ryan Reynolds.

Johansson fell victim to leaked nude photos in September, after a hacker infiltrated her private e-mail account. The photos show the 26-year-old actress in a towel with an exposed backside, while another shows her topless.

The hacker, Christopher Chaney from Florida, was arrested in October and charged with 26 counts of cyber-related crime, including leaking private photos from Johansson and other actresses including Mila Kunis and Vanessa Hudgens.

Johansson, who usually is reluctant to speak about her private life, also touched on her divorce from Reynolds, 35, earlier this year after two years or marriage.

“I didn’t really know what to do with myself. It was such a strange time. There was nothing that was interesting to me. I had a very public separation. It was difficult. I felt very uncomfortable,” the actress said.