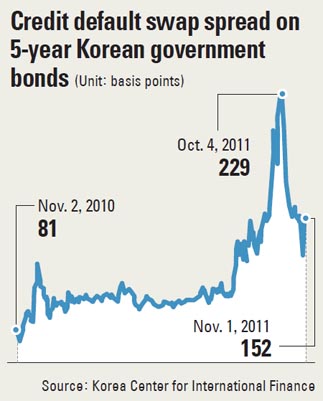 Stock indexes around the world suffered losses yesterday as an abrupt call by the Greek prime minister to hold a referendum on the EU’s latest bailout plan raised fears that the country may be approaching a disorderly default.

Markets tumbled, with the benchmark Kospi falling almost 50 points before regaining ground to finish just below the 1,900 mark.

With political spats erupting in Greece, local analysts said uncertainty remains high but also pointed out that a referendum may not occur, although the Greek cabinet unanimously backed the plan yesterday.

However, with signs pointing to the euro zone crisis settling in for the long haul, as forecast by analysts, macroeconomic indexes that had been showing signs of returning to normal may become unhinged again.

Global stocks tumbled yesterday as concern over a messy Greek default returned with a vengeance.

Europe bore the brunt, with the Stoxx Europe 600 plunging by the steepest level since Sept. 22 as it sank 3.5 percent to finish at 235.06 on Tuesday (local time), paring last month’s biggest advance since 2009.

National benchmark indexes in France, Germany and Italy all plummeted by between 5 percent and 6.8 percent.

With Asian stocks also backsliding, the Kospi opened nearly 40 points lower than Tuesday’s close. It shed another 10 points as panic set in, then rebounded to settle at 1,898.01, or 11.62 points below Tuesday’s close, as institutional investors went on a late shopping spree.

“Investors feared a Greek default, [but] anticipation of a rebound in the U.S. stock market [overnight in Korea] began to build as U.S. futures turned positive in the afternoon,” said Kwak Joong-bo, an analyst at Samsung Securities. “Strong purchases by retail investors and pension managers recouped some of the earlier losses.”

Meanwhile, long-term economic indexes showed signs of flaring up after cooling down earlier. According to the Korea Center for International Finance, the credit default swap (CDS) spread for five-year Korean government bonds spiked 20 percent in two days to 153 basis points on Nov. 1 after previously dropping. This means the price of insuring local government bonds against a default is going up.

The latest rout of world markets was triggered by Greek Prime Minister George Papandreou, who unexpectedly announced a vote of confidence on Monday, as well as his desire that a referendum be held on the EU’s bailout pact.

Some local experts believe a referendum is unlikely and predict a quick dissipation of investor anxiety. “Holding a referendum in Greece is not a simple matter as it is related to amending their constitution,” said Ji Gi-hoat of LIG Investment & Securities.