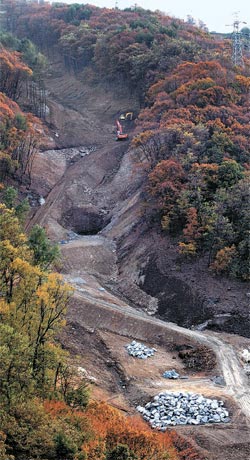 Although it will have been 100 days on Friday since the devastating landslide on Mount Umyeon that resulted in 16 fatalities and hundreds of refugees, residents remain stranded in the still-devastated area and it now appears that they may not be fully compensated for their losses.

In Bangbae-dong, southern Seoul, residents of a Raemian apartment complex are still fighting the aftermath of the July 26 landslide. A park in the complex was swept away, and the local community center is virtually abandoned. None of the elevators, intercoms or CCTV cameras in the buildings work because of torn electrical wiring. Broken street lamps make residents reluctant to go out at night.

“Before, people enjoyed taking evening walks, but now they don’t leave their apartments after sunset,” a resident told the JoongAng Ilbo.

Many residents say their biggest enemy is fear, and a rain shower is enough to cause anxiety. “On rainy days, I immediately look at Mount Umyeon, for fear of another landslide,” said Yu Jeong-hui, 60, a resident.

But it seems that it will take some time before the apartment complex is fully restored, largely because of insufficient insurance coverage. While residents estimate that about 7 billion won ($6.2 million) will be needed to restore the buildings and other facilities, including parking lots, the park and gardens, insurance companies say they will only pay for damage to the buildings, not the other structures.

“According to the government’s damage assessment rules, even if an apartment building is damaged by a landslide, if the columns of the building remain intact, it is considered only half-damaged. So we receive only a small amount, about 5 million won per person,” said resident Kim Hong-yeong. “Neither the government nor the insurance company cares about us.”

A resident of Jeonwon Village, also damaged by the landslide, said, “My house was completely devastated, but the local district office said to repay the compensation money as my house wasn’t fully submerged.”

The Seoul Metropolitan Government says that a landslide, as a natural disaster, is outside the realm of what it can offer. “We will restore Mount Umyeon by May, but we don’t have any plans to reinvestigate the surrounding regions,” Jeong Jung-gon, a city government official, told the JoongAng Ilbo yesterday.