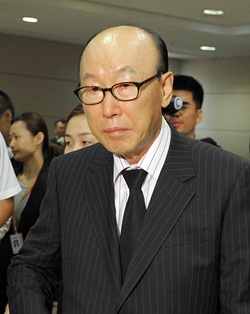 Prosecutors indicted both a former and the current CEO of a newspaper for embezzlement. According to the Seoul Central District Prosecutors’ Office, Cho Hee-jun, 46, a former chairman of the Kookmin Ilbo, was indicted yesterday without detention and charged with misuse of company funds. Prosecutors said Cho was loaned 3.6 billion won ($3.2 million) from a company owned by Next Media Holdings, of which Cho was a major shareholder, to pay off personal debts. Cho, the prosecutors said, asked Lee Jeong-woo, 62, an executive of Next Media Holdings, to give him the money on Oct. 30, when some of his property was seized due to unpaid taxes.

Cho Min-je, 41, the CEO of the Kookmin Ilbo, was also indicted without detention by prosecutors on Monday on the same charge. Prosecutors said Cho Min-je generated 4.5 billion won in losses for KyungYoon Hydro Energy, based in Anyang, Gyeonggi, by purchasing a hydrogen battery company’s stocks, which were considered profitless. Prosecutors said Cho Min-je used KyungYoon funds to purchase the stocks after he acquired KyungYoon with several other investors. Cho Min-je, however, denied the charges, saying, “I only invested in KyungYoon and was never involved in management. I will sincerely cooperate with the prosecutors’ investigation in order to reveal the truth.”

Cho Hee-jun and Cho Min-je are the sons of Pastor David Yonggi Cho, 74, who was charged with dereliction of duty and misuse of church funds in September.