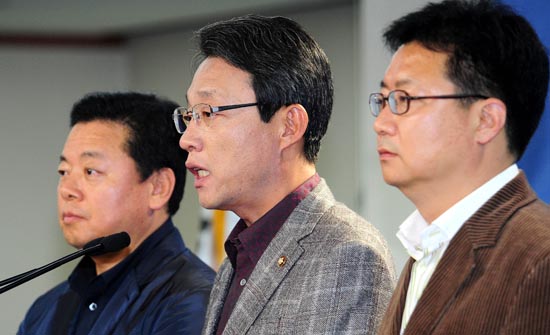 
A group of reform-minded freshmen lawmakers from the ruling Grand National Party called on President Lee Myung-bak to apologize to the public in the wake of the party’s defeat in the Oct. 26 Seoul mayoral by-election and demanded reform in the ailing party.

In a press conference yesterday at party headquarters in Yeouido, western Seoul, the freshmen lawmakers released their “reform compact,” a letter addressed to the president and top party leaders that was signed by 25 GNP lawmakers.

The letter was officially submitted to the Blue House yesterday through Kim Hyo-jae, senior secretary to the president for political affairs, shortly before the press conference.

In their letter to the president, the lawmakers made five demands including a demand for a public apology for corruption scandals involving his close aides and for the controversial plans for his retirement home in Naegok-dong, southern Seoul.

Among the demands was for the president to scrap his “747” pledge from his 2007 presidential campaign, in which Lee promised the country 7 percent GDP growth, $40,000 per capita income and to become the seventh-largest economy.

The freshmen lawmakers also asked the president to shift his administration’s economic policies from growth to jobs and welfare. Moreover, they demanded transparent and swift handling of power abuses and reform of the country’s prosecution.

“The GNP and President Lee should sincerely apologize and work toward qualitative change, or the current administration will be remembered as a government that failed before history and the people, and the Grand National Party as a party that was rejected by the people,” the letter read.

Members of the Lee Myung-bak faction in the ruling party expressed displeasure with the reformist lawmakers’ tactics.

“This is what all party members, including those who brought up the subject, should be agonizing over together to find solutions,” Kim, the senior secretary, said upon receiving the letter. “The Blue House will always have its ears open and listen to the members’ counsel.”

Kim, however, said that raising the issue when the president was out of the country was inappropriate.

“I believe now is the time when we should be cooperating to resolve pending issues including the FTA ratification,” Kim said.

A high-ranking Blue House official also said, “Bringing up an issue that splits the ruling party when we should be putting all efforts into ratifying the FTA is frustrating.”